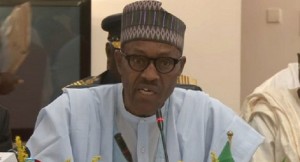 Minister of the Federal Republic of Nigeria are living with their hear in their mouth. … and the famous joke among them now is …. “the fear of Buhari is the beginning of wisdom“. “He is looking for scapegoat, everybody is careful. He has headmaster approach” an insider disclosed.

Sources inside Nigeria’s Presidency said that fierce disagreements over treaties signed between Nigeria and the United Arab Emirates (UAE) nearly led to the sacking of top ministers in President Muhammadu Buhari’s government. The sources disclosed that Minister of Trade and Investment, Udo Udoma, and Minister of Finance, Kemi Adeosun, expressed serious concerns over the provisions of several of the treaties President Buhari planned on signing with the UAE. The ministers’ opposition caused serious friction within Mr. Buhari’s team, We learned.

Mr. Buhari met earlier this week with Sheikh Mohammed Bin Al Nah Yan, the Crown Prince of the UAE, to discuss a range of financial and political issues and to sign six bilateral agreements. According to documents exclusively leaked, the six agreements focused on four judicial issues: extraditing criminals in the UAE to Nigeria, the transfer of incarcerated and sentenced persons, mutual legal assistance on criminal matters, and mutual assistance on civil and commercial issues. The bilateral agreement expressly states that these agreements relate to the “recovery and repatriation of stolen Nigerian assets.”

Ahead of the signing of the agreements, Garba Shehu, the Senior Special Assistant for Media and Publicity to President Buhari, stated, “Nigeria also expects to get more support from the UAE for its war against terrorism and the recovery of Nigeria’s stolen funds.”

However, Younews learned that the commercial and trade agreements signed between Nigeria and the UAE were considered by many on Mr. Buhari’s delegation as counter to Nigeria’s best economic interests. The most vocal dissenters, according to sources, were Mrs. Adeosun and Mr. Udoma, who counseled Mr. Buhari not to sign those agreements.

Our sources revealed that Mr. Buhari was, however, not interested in his ministers’ arguments that the economic agreements between Nigeria and the UAE were weighted against Nigeria’s interests. “Mr. President was focused on doing whatever was necessary to repatriate stolen funds and extradite criminals hiding in the UAE,” said one source. He added, “He was so concerned about that sole issue that he became incensed about the warning from some members of his team.”

At one point in the debate, Mr. Buhari declared his readiness to relieve Mrs. Adeosun and Mr. Udoma of their portfolios if they did not drop their opposition to the agreements.

One source told Younews that the two ministers realized the importance of identifying and reclaiming assets illicitly stashed away by corrupt Nigerians in the UAE, especially Dubai. However, they felt that Nigeria gave away too much in terms of its bilateral economic interests in order to achieve the president’s major goal.