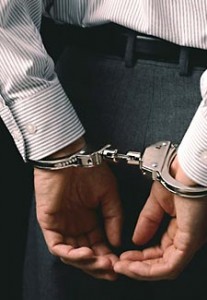 It was wild jubilation around Ebute meta area in Lagos district on Monday following the death of a notorious hoodlum in police custody.

The suspect identified as Sunday Terror, has been linked with several armed robbery incidents, murder and rape cases in the area including the death of four persons last December.

The Nation learnt that Terror who was arrested at about 11:20am on Monday, at Downtown Ondo Street, has been on the wanted list of the police for over seven months, but has also escaped each time the police got close to apprehending him.

He was however unfortunate on Monday as residents who discovered his hideout alerted security operatives, prompting the Divisional Police Officer of Danton Police Station, Olarenwaju Quadri, to lead a special squad to the area.

Upon sighting the police, Terror, said to be in company of his other gang members identified as Dagbe, Omosoku, Oloto and Oshankele reportedly opened fire on the policemen

The police in reprisal shot all four of them, but the other three escaped with gunshot wounds through the waterside.

Terror was then arrested and brought to the police station, a feat that caused huge jubilation in the area.

The news of his arrest soon filtered into Ebute-Metta, with people rushing down to the station to demand that he should be killed.

Our correspondent gathered that the crowd which blocked the entire express included market women and traditional rulers, cursing him and insisting he should not be taken to the hospital.

Although most of the crowds have dispersed at the time The Nation visited, those who were still around the police station claimed that the suspect confessed before he died.

“He has made life impossible for a lot of people here. So many people are afraid of Terror and his gang. People celebrated his arrest and his death because if he was taken to the hospital, his godfathers, who are politicians would have found a way to free him.

“He confessed here that he was behind the death of four people at Evans Square in December. His gang killed four people and injured over 20.

“He also confessed that he was the one who beheaded one member of the Black Axe cult, as well as killed two people in Idumota,” one of those at the police station said