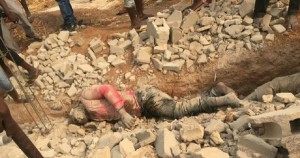 There was outrage yesterday in Enugu State following the discovery shocking images of dead bodies buried in shallow graves along the Enugu Port-Harcourt Express Road.

The incident, which occurred on Monday evening at the Ugwuaji Area of the State has kept residents in tears. The corpses were buried inside the foundation of the building suspected to be a church under construction and totally covered with concrete.

It was gathered that construction of the building whose owner could not be immediately ascertained, commenced recently and was at the foundation level before the gory discovery Monday.

Unconfirmed sources said one of the workers at the site, who heard about the burial of the deceased inside the foundation before it was concretized, alerted security operatives about the evil act. Policemen were said to have after receiving the tip-off mobilized some labourers who dug the foundation open and discovered the corpses.

The discovery attracted several passersby and motorists plying the road to the scene. They expressed shock at the discovery and called on security agents to do everything possible to fish out the perpetrators of the act, who they suspected could be ritualists.

Some residents of the neighbourhood alleged that the building believed to be a proposed place of worship, belonged to a ritualist who disguised to be a man of God. The State Police spokesman, Mr Ebere Amaraizu, who confirmed the report said the corpses were recovered from the site following a tip-off.

“On information, three decomposing bodies were discovered and full scale investigations have commenced with a view to unmasking circumstances surrounding the incident,” he said.

Meanwhile, fear has gripped residents of Ugwuaji as security operatives were said to have swung into action to crackdown on the ritualist and his cohorts who killed and buried the deceased persons. One of those who were at the scene described the act as “wicked and the most inhuman action I have seen in my entire life.”