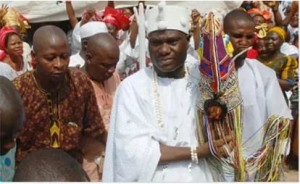 Premodial sentiment rear its ugly head in Osun state;it was free for all fight  at the monthly meeting of the Osun State Council of Obas .

Reason: There was an argument over the seating arrangement.

The Owa Obokun, Oba Adekunle Aromolaran, did not  allow the advance team of the Ooni of Ife, Oba Adeyeye Ogunwusi, to place his seat at a vantage position.

The vice-chairman of the council, Oba Aromolaran, allegedly refused to allow  the Ife team place the Ooni’s seat in front of him.

The Ooni is the permanent chairman of the council

It was learnt that Oba Aromolaran, who had arrived earlier before Oba Ogunwusi, allegedly stopped the Ooni’s advance team.

It was further learnt that the dress of one of the emissaries (emese) was torn during the “scuffle”.

The emeses were said to have insisted on placing the seat in a particular position. They claimed that they were acting on the Ooni’s instruction.

The meeting was postponed indefinitely.

Governor Rauf Aregbesola invited the monarchs to a meeting at the Government House.

It was gathered that Oba Aromolaran left the Government House a few minutes before Oba Ogunwusi arrived.

The Ooni went to visit the Owa at his palace in Ilesa.

Oba Ogunwusi was said to have told Oba Aromolaran that he was not interested in fighting for any position but for peace among  Yoruba obas.

The Ooni was also quoted to have said that “you are one of the prominent traditional rulers in Yorubaland and it is in my own interest and that of the larger Yoruba people to relate very well with the Owa”.

“I have just spent about three months on the throne now while you, Owa, have spent about 34 years.

“It is my responsibility to visit you first because you have been on the throne for long.

“It has been said by God that I should come and liberate Yorubaland and to ensure peace and unity.

“I am not engaging in any leadership supremacy with anybody.”

Owa reportedly told the Ooni that “your visit is a surprise to me and it is the least expected. Now that you have come to show a hand of friendship, I will now join your unity train to unify the Yoruba.”

The Ooni’s Director of Media and Publicity, Moses Olafare, said the Ooni’s position as the council’s permanent chairman  was incontrovertible.

Olafare said: “Ooni would not want to be drawn into what happened.

“But he (Ooni) remains the permanent chairman according to law.

“The issue of who becomes the chairman is a creation of law and can only be reversed by law.

“Whoever is not satisfied with the arrangement should either go to court or the House of Assembly and seek a review of the law.”