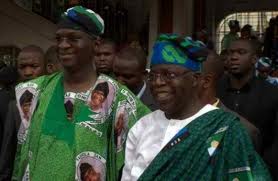 Inspite of perceived and real differences between president Buhari and Asiwaju Tinubu,there are reasons to still see him as a major force and leader of leaders.. (1) Prof Yemisi Osinbajo SAN was Tinubu’s Attorney General and Commissioner for Justice. He is today, Nigeria’s Vice President (2) Rauf Aregbesola was Tinubu’s Commissioner for work. Today he is serving his second tenure as Governor of Osun State (3) Babatunde Raji Fashola, SAN was Tinubu’s Chief of Staff and successor in office. He is today Nigeria’s Minister of Power, works and housing (4) Alhaji laid Muhammed was Tinubu’s first chief of staff. He is today Nigeria’s Minister of information (5) Babatunde fowler was appointed by Tinubu as Chairman of the Lagos state Internal Revenue Service. Today, he is the Executive Chairman of the Federal inland Revenue Service. At the National Assembly, there are countless “Tinubu boys” who have occupied and are still occupying seats till today.

Since 1999, the Tinubu camp has produced almost 98% of the members of the National Assembly from Lagos state. Forget politics, this man is a political enigma. Rewind to 1999 I am sure most of us have forgotten the names of the people who were elected Governors then. Some of them have gone out of circulation. Some are gasping for breath politically. Indeed, most of them are no longer relevant today.

Who still remember Mbadinuju of Anambra state, Jolly Nyame of Taraba, Muhammed lawal of kwara, Segun Osoba of Ogun state, Attahiru Bafarawa of Sokoto, Achike udenwa of Imo, Victor Attah of Akwa Ibom, Orji Uzor Kalu of Abia? That one has lost two consecutive senatorial elections. But Tinubu has not only managed to remain extremely relevant, he has continued to control Lagos politics 100%. Not only that, he manages to carry his boys along and today they occupy critical position in our national life.

Take it or leave it, Tinubu is today, Nigeria’s most powerful political. It didn’t just happen by chance. He worked very hard for it. Very very hard. The hallmark of a true leader is not just the ability to rule well but also the ability to nurture and groom his associates.