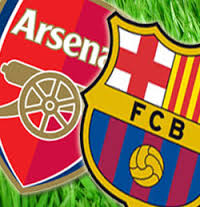 Tension As Arsenal Tackles Barca Today : Can the Gunners stop the Spanish aristocrats?

Ahead of Tuesday night’s Champions League Round of 16 tie between Spanish giants Barcelona and English Premier League (EPL) side Arsenal, below are some highlights of previous encounters between the two sides.

It was Barcelona’s fifth appearance in the final, having won the competition once in 1992, and lost the other three finals.

Meanwhile, Arsenal was appearing in the final for the first time and in doing so became the first club from London to feature in the final.

That victory was Barcelona’s second victory in UEFA Champions League, 14 years after the Catalans first won the tournament in 1992.

Cesc Fàbregas’s late penalty sealed an unlikely recovery as the English side recovered from two goals down play 2-2 with the defending champions.

In the return leg played on April 6, 2010 at the Spanish side’s Nou Camp cauldron, Barcelona trashed Arsenal  4-1 to progress to the quarter final on 6 – 3 aggregate.

The two sides met again at the same stage 11 months later, precisely on February 16, 2011 and Arsenal defeated Barcelona 2 – 1 in the first leg played in London.

Barcelona trashed Arsenal 3-1 in the second leg played two weeks later at Nou Camp and qualified for the quarter final on 4-3 aggregate.

Going by records of previous meetings between both sides, the odds are firmly staked against the English side in Tuesday’s encounter.

Will the Arsene Wenger managed Londoners shock soccer pundits by stopping the Spanish juggernauts in their stride?

The match will kick off at 8.45pm on Tonight.