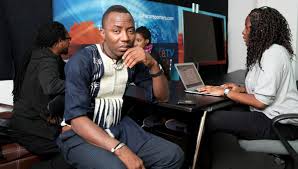 It is actually more difficult to make money from online media now than it was before. I make the distinction between legitimate and illegitimate earnings because I was determined, from the beginning, to pursue only legitimate earnings. Google AdSense is paying less and less for ad inserts, and other services are also paying less. Everyday, new means and formats of advertisement pop up. Direct advertisers are paying, but only if you’re willing to do their bidding. We can’t allow that to happen. There is a category of publishers that are working directly for interests or blackmailing people. I understand those kinds of publishers make a lot of money, but I consider what they do criminal, illegitimate and unethical

.Did Asiwaju Bola Ahmed Tinubu or any other Nigerian politician or political party officer provide funding for Sahara Reporters at any time in the past? Is Ford Foundation still funding you?

I’ve only met Bola Tinubu once in my life, in 1999 before I left Nigeria. I’ve heard a lot about his alleged generosity, but I am not interested in his money or dole outs. I think there are many people who have made so much from him that they and others can’t believe there is anyone out there who has not collected money from him. And who is not interested in the least. I am determined to continue to stand out in this way. I always challenge anyone, I mean anyone, to release information to the public if I have ever received a kobo from Bola Tinubu in my life.

Ford Foundation funded SaharaReporters until the last general elections of 2015. Even when Reno Omokri tried to scare them by threatening to sue them on account of our expose of his shady activities, they didn’t back down. SaharaReporters, as a cutting-edge digital medium, has recently received further funding from Omidyar Network in California.