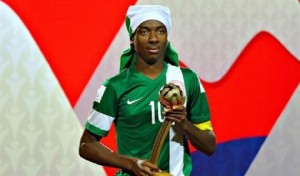 Nigerian player, Kelechi Nwakakli, has been signed to English Premier Club for a whooping £2million.

Nwakali has been in London for over a month trying to sort out a deal with Arsene Wenger’s team.

He has now put pen to paper after passing a club organized trial, with his academy Diamond Football Academy, set to receive over £2m as training and development fee.

His representative has confirmed the transfer of the 17 year old Under 17 World Cup star is a done deal and that the London club has agreed a 5-year contract with the Nigerian boy who was nominated for the 2015 CAF Youth player of the year.

“Kelechi has signed a five-year deal with Arsenal, his agent Klay Ekeocha told Sports Day. ‘I won’t be able to mention the exact transfer fee but it is above £2m.”