Abducted 3 Lagosgirls Rescued ..The 3 Major Factors That Made It Possible 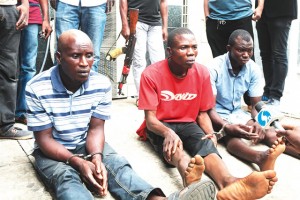 The girls — Timilehin Olosa, Tofunmi Popoola and Deborah Akinayo — were kidnapped by gunmen on Monday on their school premises.

It was gathered that the public outcry prompted the government to meet the needs of security agencies on the rescue operation, while the Inspector-General of Police, Solomon Arase, sent his special team to Lagos to take over the operation.

A police source who disclosed that security agents had earlier infiltrated the gang and arrested their parents in a bid to force the hand of the kidnappers, added that the criminals gave up because of too much pressure on them.
“After Arikiti was arrested, the father of two of the criminals, volunteered to go into the Adamo creeks to speak with the others.
“He went with a canoe after Arikiti gave the police exact location of the girls. When he got to the creeks, he appealed to their baser nature, while informing them that the police have arrested one of their gang members.
“He also told them that if they dont release the girls, that the police had stationed their helicopters for aerial bombardment. Seeing no other way out, the suspects quickly took the girls to Igbo-Okuta Bridge, Imota, dropped them their and called in anonymously,” said the source.
Confirming their release, Owoseni:
“Yes the girls have been rescued. I am with them and about to hand them over to thier principal and parents. In continuation of our search for the girls, I received information that they were sighted at Imota area of Ikorodu. I went there to pick them up in my car and they are safe in police custody.
“There were rescued about 9.44am today (Sunday). I can confirm that some of the suspects were arrested. We are not aware if ransom was paid.”
Owoseni who slept in the area said he was driving around Ikorodu in his car when he got a telephone call that the girls were sighted at Imota.
“They were rescued by the Imota police division. I carried the girls in my car and took them to the school to reunite them with their parents and loved ones. The girls are fine but we will not be exposing them to the media as a result of their age (14 years).

The security agents had combed every nook and cranny of the state, especially the Ikorodu area, making the abductors uncomfortable to stay in one place. it was discovered that the victims were initially taken to Adamo forest immediately after their abduction.Adamo forest is across the river in Lugbusi community, where the school is situated in Ikorodu.

The source said, “We gathered that the kidnappers were 12 men, and they came in eight canoes. They used seven AK-47 rifles for the operation.

“One of the men, who we later identified as Lamiameni, brought the kidnapping job to the gang, while another member, known as Felix, alias Tradition, was the one communicating with the families for ransom negotiation.”

Another source said from the forest, the gang moved to a creek, located between Ikorodu and Epe, Lagos State, where they also held the girls.Security agents were said to have had the first break on March 4, when a suspected kidnapper, Emmanuel Arigidi, aged 37, was sent by the gang from the creeks to buy foodstuffs.

He was said to have bought foodstuffs big enough for an army, which confirmed the suspicion that he was a member of the gang. He was subsequently arrested.

He said, “Arigidi broke down during interrogation and confessed to being a member of the gang that stole the schoolgirls. He gave us the direction to the place they were keeping the girls, and mentioned the names of other members. He even promised to lead the operatives to the location.”

It was gathered that after waiting for Arigidi for two days, the gang sensed that something was amiss and thereafter moved to an area around Igbo Okuta Bridge, Imota, Ikorodu.

It was gathered that possible hiding places had been discussed among the gang members during the planning of the kidnapping.

When security operatives therefore noticed that there were no activities in the creek, they suspected that the gang had fled the area. But Arigidi had no problem in revealing the place they could be.

Also, the relatives of suspected abductors mentioned by Arigidi were said to have been rounded up and made to plead with their people on the telephone to release the girls.It was learnt that the fathers of two of the suspected kidnappers were allowed on Saturday to go after their sons to talk to them and other gang members to release the girls.

“At about 5am on Sunday, over 500 operatives, comprising the IG team, the Lagos State Police Command and other security agencies stormed Imota and rescued the schoolgirls at the Igbo Okuta Bridge area of Ikorodu,” a source said. Two other suspected kidnappers were arrested during the operation.

Another top police said that the family had not paid any ransom before the girls were rescued, adding that creeks in Ikorodu were still being combed for other Arigidi’s gang members.

He said, “The boys (kidnappers) came through the shallow water behind the school with eight canoes and seven AK-47 rifles for the operation and escaped with the kidnapped girls with the same canoes. Arigidi mentioned Clement Abanara, aka Millions, earlier arrested by the IG team, as his boss.”

Another police source, however, said the kidnappers abandoned the girls and fled the scene.

He said, “The arrest of one of Arigidi’s gang members forced other members of the gang to abandon the girls at Imota. Efforts are in progress to arrest the fleeing kidnappers.”

There was disagreement among us

One of the kidnappers of the three abducted schoolgirls, Emmanuel Arigidi, said on Sunday that there was an altercation between him and other 11 members of the gang, which forced him to leave the gang.

Arigidi was paraded on Sunday at the Governor’s Office in Alausa, Ikeja, with two other accomplices — Akanji Sheu and James Henry.

It was gathered that the pupils were rescued by security agents in the Imota area of Lagos.

Arigidi said he opened up to the men of the Special Anti-Robbery Squad, who arrested him in the Majidun area of Ikorodu.

Arigidi, who spoke in pidgin English, explained that he was invited to participate in the abduction by Lamiameni and Felix, who are still at large.

He said, “Lamiameni was the one who brought the deal and we discussed how to carry out the operation at Majidun. We were 12 in number. We went to Maya Bridge to board a canoe and around 8pm, we entered the school and abducted three girls.

“There was a misunderstanding among us on how to keep the girls. I told them I did not like what we had done and we should release the girls because security had become tight and the police were on our trail. But my gang members threatened to kill me. I managed to board a boat and run away from our den. Three days after, SARS arrested me at Majidun and I explained everything to them.”

Henry,one of them said; said he was a victim of circumstance. He said he helped customers to register their lines in Ikorodu, adding that a line, which he registered, using his photograph, was used by the kidnappers.

It was learnt that the kidnappers had used the line to negotiate ransom with the school and Henry was picked up after the police tracked the number.

He said, “I register SIM lines for customers in Ikorodu. I helped a customer to register his line but after he had left, I discovered that his photograph did not appear on his profile. In an attempt to submit his details, I used my photograph instead. That was how the police traced the line to me. Except the photograph, other details are not mine.”

The Lagos State Commissioner of Police, Fatai Owoseni, said medical treatment carried out on the freed schoolgirls confirmed that they were hale and hearty, adding that the police adopted intelligence-based policing and technology to rescue them.

The CP also dismissed speculations that ransom was paid for the release of the pupils.

“We arrested three suspects. One is actively involved, while the two others are conspirators who, one way or the other, aided the kidnapping. With respect to the health of the girls, they are well, stable and immediate medical attention has been given to them by the police medical team. When we rescued them, one of the questions we asked them was whether they were molested in any way and they stated unequivocally that they were not molested in any way.

“When you talk about ransom in this case, you are glorifying them. We should not be talking about that again in this country. Talking about it means telling people that kidnapping is of value and people can make money from it. What was employed in rescuing the girls is more of application of intelligence-led policing, using the platform of technology and partnering members of the community.

“We mounted pressure on the kidnappers. What we did with other security agencies was that we went for the members of their (kidnappers’) families – the mother, the father and their children and with that pressure, they found that there was no way for them again to keep on to the girls. That was what led to the success of the rescue operation. The girls were rescued around Imota, Lagos

Around 11.30am on Sunday, saw parents celebrating the rescue of the girls, while a thanksgiving prayer session was immediately organised in a church on the school’s premises.Amid shouts of praises and laughter, some parents were seen hugging one another while the school frontage was filled with cars of parents, who came to celebrate the new

We will fight all crime

The Lagos State Governor, Akinwunmi Ambode, on Sunday said his administration had the will and capacity to fight all forms of crime and criminality in the state.

He added that kidnappers would find no hiding place in the Lagos.

The governor, who addressed journalists on the safe rescue of the girls, said his administration would spare nothing to clamp down on all forms of crime in the state.

He said, “Let me warn that the state government will not tolerate kidnapping or any form of crime in Lagos.

“Our position is clear and unambiguous; Lagos State has the capacity and the will to go after every form of crime and criminality in order to safeguard lives and property.”

The governor added that he was relieved that the girls were rescued in the early hours of Sunday.

“The three girls have been safely re-united with their families and the government wishes to assure Lagosians that their security is top priority and it will not relent in ensuring that Lagos remains safe and secure,” he said.