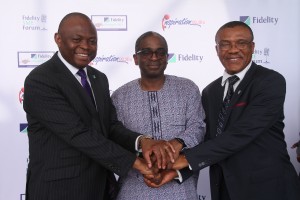 As part of efforts to accelerate the diversification of Nigeria’s monolithic economy, Fidelity Bank Plc, one of the nation’s most capitalised financial institutions, Lagos Business School (LBS) and the Nigerian Export Promotion Council (NEPC) has entered into a tripartite agreement aimed at enhancing the export readiness of Micro Small and Medium Enterprises (MSMEs) through a robust capacity building initiative. Dubbed Export Management Programme (EMP), this laudable initiative is designed specifically to provide impactful, world-class training needed to improve the competitiveness of Nigerian enterprises, particular export-oriented businesses in global markets.

Speaking during the press briefing heralding the signing of the tripartite agreement in Lagos on Tuesday, Managing Director/Chief Executive Officer, Fidelity Bank Plc, Nnamdi Okonkwo said the pact was significant in view of the prevalent economic downturn triggered off by the steep decline in global oil prices and ensuing capital controls by the apex bank. Okonkwo, who was also a guest speaker at the Fidelity SME Forum, a weekly radio talk-show programme sponsored by the Bank stated, “Long before the global oil price debacle, we had seen the need for the diversification of the Nigerian economy and the opportunities it portend for many MSMEs. To that end, we had renewed our focus on the MSME segment”.

The Fidelity boss said the lender has earmarked a N30 billion financing line for Nigerian MSMEs engaged in exports. As further proof of the financial institution’s unwavering commitment to the growth and expansion of the economy, Okonkwo disclosed that the lender is collaborating with NEPC and LBS to establish the Export Leadership Institute (ELI), the platform under which the EMP, a flagship export capacity development programme will run. Commenting on the rationale behind setting up the programme, Okonkwo explained that apart from credit, qualitative training and education is critical to MSMEs ability to compete favorably in the international markets.

“Our choice of LBS as strategic partners in this project is deliberate as the institution is the undisputed centre of excellence for enterprise development in Nigeria. Our choice of NEPC as a partner to this initiative is informed by the overarching role it plays in export promotion in Nigeria”, he explained.

Speaking in the same vein, Chief Executive Officer, NEPC, Segun Awolowo, pointed out that increasing Nigeria’s non-oil exports offers the best possible route to inclusive growth. According to him, Nigeria’s export progress and potentials are phenomenal. “Over $300 million was generated from cashew exports in 2015 alone. We have so many products to offer but we need to scale up production and capacity”, Awolowo added.

The NEPC boss, however emphasised the importance of training as a way of boosting exports, noting that Australia had improved the number of exporters from 4,000 to 50,000in one month with a similar kind of training. On his own part, the Dean of the LBS, Dr Enase Okonedo, who was represented by Dr. Frank Ojadi, said that the ELI programme will be in two parts, one for established exporters and another for fresh and intending exporters. Meanwhile, Okonkwo said that the bank has so far disbursed N2 billion to 120 customers as part of the Central Bank of Nigeria’s N220 billion MSME Development Fund.