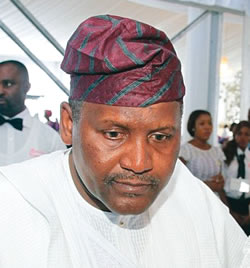 Africa’s richest man, Alhaji Aliko Dangote, is facing scrutiny after he became linked, on Friday, with alleged tax evasion when his name became associated with the world’s biggest tax scandal as contained in the Panama Papers. The name of his half-brother Sayyu Dantata has also become caught up in the scandal.

Yesterday, Dangote emerged one of several high-profile Nigerians to be implicated in the leak, which exposed how the world’s rich and famous use offshore facilities and shell companies to hide their wealth. Others so far caught up in the scandal are Senate President Bukola Saraki, his immediate past predecessor David Mark, disgraced former Delta State governor James Ibori, who is currently serving a jail term in Britain for theft, and one-time Chief of Army Staff Theophilus Y. Danjuma.

The use of offshore shell companies is not necessarily illegal but is often a tactic employed to avoid paying tax.

Ranked as Africa’s richest man by Forbes in 2015 and currently worth an estimated $17.3 billion, Dangote – the chief executive of the Dangote Group – has been closely linked to at least four offshore shell companies – and as many as 13 through his family and business associates –according to Premium Times, a reporting partner of the International Consortium of Investigative Journalists, which broke the leak.

According to the Abuja-based online daily, Dangote along with his half-brother Sayyu Dantata, both bought shares in 2003 in Ovlas S.A., a shell company registered in the Seychelles. A company co-owned by Dangote and Dantata, MRS Oil and Gas Co. Limited, also bought shares in the Seychelles-based company at the same time. The trio ceased to be shareholders in Ovlas S.A. in 2006, according to the leaked Mossack Fonseca files, but it appears that the three simply sold the shares back to themselves. In 2009, Dangote finally ceased to be a shareholder, but apparently sold his shares to Dantata and MRS.

The trio reportedly repeated a similar practice by purchasing shares in another Seychelles-based company, Petrowest S.A., also in 2003, before apparently re-selling the shares to themselves in 2006. In a confusing turn of events, the shareholders filed to change the name of Ovlas S.A. to Petrowest S.A. in 2011. Dangote was also linked to two other shell companies based in Panama – SID Holdings Corp and Chalmers Shipping Inc – and another based in the Seychelles, Paseo Trading Ltd, according to the investigation.

The Dangote Group’s spokesman, Tony Chiejina, has rebuffed any links between the Nigerian billionaire and the companies. “I wish to state categorically that neither Aliko Dangote nor Dangote Industries Ltd has any form of relationship with these alleged four offshore companies [Paseo Trading Ltd, Petrowest S.A., SID Holdings Corp, Chalmers Shipping Inc],” said Chiejina. “The Group has four quoted companies on the Nigerian Stock Exchange and cannot afford to tarnish our reputation or conduct our business in an unethical manner given this profile.”

But, according to a Newsweek report, “Despite such denials, however, the alleged links are likely to raise questions for Dangote.” Newsweek recalled that Dangote previously faced scrutiny following the Swiss Leaks scandal of February 2015.

“A leak from HSBC’s Swiss subsidiary revealed that scores of high-profile world figures were operating secretive accounts with the bank to evade tax. Dangote was found to have opened an account with HSBC’s Swiss arm in 2003 and the account was registered to a company located in the British Virgin Islands, though it was never proven that Dangote used the account to evade tax,” the magazine said in an online report.