Fashola Explains Power Problem And His Own Solution 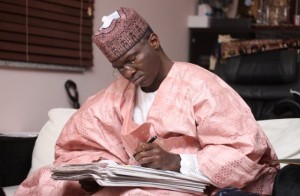 The Minister of Power, Works and Housing, Babatunde Fashola, stated  that only 50 out of the 140 power generating turbines in the country were currently functional.

Vice President Yemi Osinbajo had on Monday said that the country lost 99.6 per cent of its total electricity generation, about 3,132 megawatts, last week .

Fashola gave further reasons why some parts of Nigeria had been thrown into darkness in the past few days as he stated that about 90 power generating turbines across the country were not functional.

He said, “The first problem is that there’s not enough power. Today, we have 25 power plants. Three – Shiroro, Jebba and Kainji – are hydro plants, while the rest are gas-fired plants. We have an installed capacity of about 12,000 megawatts. Also, we have about 140 turbines installed, but available capacity is about 8,000MW.

“Now, the power being generated comes from only about 78 turbines out of 140 and they are largely fired by gas. Now, that power has gone down because we had gas outage due to the failure of pipelines. And as a result of that, 78 turbines dropped to maybe about 50 because there was no gas. As of yesterday’s (Monday) energy report that I got, we were producing only 3,393MW. I will get today’s (Tuesday) report.

“But let me be very clear, this problem can be solved. It just needs somewhat a detailed and methodical approach. So, the first work to do is to supply more gas; for without gas, we can’t have power. The Ministry of Petroleum Resources is working on this and we have agreed to provide more gas to all the struggling power plants. So, there are errors of planning of yesterday, but they are errors that can be corrected.”

“But that gap has been bridged now by an addition of $2 to bring it closer and it’s now $3.30. This has been accommodated in the price of power, and that’s one of the reasons why we have the new tariff order.”

He stated that incremental power would come when the country could generate additional electricity, adding that the government had resolved the crisis slowing down the operations of many power firms like the Aba Independent Power Project being run by Geometric Power and the Zungeru Power Plant.

Fashola stated that the government had a plan to complete 47 power projects in this year’s budget, adding, “I believe that we can do it even if the budget is passed today. And our focus has been that as much as possible, there will be no new project.

“There are many projects that have been awarded that are not being funded. So, if we put money into the existing projects, we can gain a lot of time.”

The minister revealed that Nigeria had no functional coal power plant, adding that the ministry had started issuing electricity generation licences to firms that would generate power from renewable sources.

“In the last three or four weeks, we approved the framework to start licensing about 14 solar power projects. The cumulative power that they will add to the grid is about 1,286MW. So, I am optimistic that we will get things right,” he added.

On calls for the review of the privatisation of the power sector, Fashola stated that the government would not heed such suggestion based on previous experience, particularly with respect to the reversal of the concession agreements on the refineries by the administration of the late President Umaru Yar’Adua.