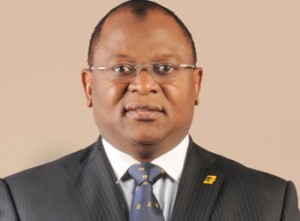 FBN Holdings Plc, the parent company of First Bank Nigeria Limited, is planning to cut about 1000 jobs and focus less on providing loans to the oil industry in a bid to reverse  the 2015 financial year’s 82 per cent slump in profit…And the move is a major source of apprehension the system,as we write.

The lender expects to boost its return on equity, a key measure of profitability, to between 11 per cent and 14 per cent in 2016 from last year’s “really bad” figure of three per cent, according to the Chief Executive Officer of First Bank of Nigeria Limited, FBN’s main subsidiary, Mr. Adesola Adeduntan.

He said the company was also targeting a cost-to-income ratio of 55 per cent in two years time from 59 per cent, Bloomberg reported.

“ROE will be much better than last year,” Adeduntan said in a telephone interview from Lagos on Wednesday.

“At a minimum, we should triple it. We do not shy away from taking difficult decisions. We used to have above 8,000 people. We’ll push it down, gradually to 7,000,” he added.

Its net profit fell to N15bn ($76m) from N84bn in 2014, as impairments soared and the economy slowed amid a crash in the price of crude, the biggest source of Federal Government revenue and export earnings.

Growth decelerated to 2.8 per cent in 2015, the lowest level since 1999, and may worsen to 2.3 per cent this year, according to the International Monetary Fund.

First Bank’s non-performing loans ratio stood at 22 per cent at the end of March, compared with 3.8 per cent a year earlier. Reducing that figure is the “number one priority,” said Adeduntan.

He said the bank would do that by reducing the proportion of its lending to the oil and gas sector, currently at about 39 per cent of total loans, and focusing more on blue-chip companies in other industries.

Adeduntan ruled out any equity raising this year, saying the bank’s capital adequacy ratio of 17.2 per cent was enough of a buffer and above the Central Bank of Nigeria’s minimum requirement of 15 per cent.

It would still be adequate if the floor is raised to 16 per cent in July for Systemically Important Institutions, including First Bank.

“We continuously evaluate it and the position now is that there’s no need for external capital,” Adeduntan, 46, who became the CEO in January after joining First Bank as chief financial officer in mid-2014, said.

“We generate enough internal capital,” he said. FBN’s shares rose by 5.3 per cent to N3.57 on Wednesday. They are, however, still down 30 per cent this year, more than the Nigerian Stock Exchange All Share Index’s drop of 13 per cent.

The bank’s valuation lags that of its main competitors such as Guaranty Trust Bank Plc and Zenith Bank Plc. Its stock trades at 0.22 times book value, or the theoretical price that shareholders will get if all assets are sold and liabilities paid off. That compares with 1.18 times for GTBank and 0.62 for Zenith.

“The market has over-corrected,” Adeduntan said, adding, “It’s priced in all the negative information. For us, it can only go up.”