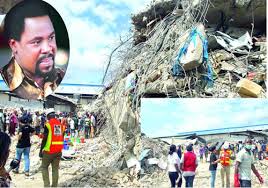 The two engineers alongside their companies – Hardrock Construction and Engineering Company and Jandy Trust Limited – are being tried on 110 charges of involuntary manslaughter.

Standing trial along with them are the Registered Trustees of SCOAN, who were charged with the offence of building without the approval of the state.

The defendants were arraigned on April 19, 2016 by the Lagos State Directorate of Public Prosecutions before Justice Lateef Lawal-Akapo.

They had pleaded not guilty, following which the Lagos State Director of Public Prosecutions, Mrs. Idowu Alakija, urged the judge to remand Ogundeji and Fatiregun in prison custody pending trial.

However, counsel for the 4th defendant, Fatiregun, Mr. Olalekan Ojo, and that of the 5th defendant, Ogundeji, Mrs. Titilola Akinlawon (SAN), respectively filed applications urging the court to admit their clients to bail on liberal terms.

Ruling on the bail applications on Tuesday, Justice Lawal-Akapo said he was inclined to admit Ogundeji to bail because the state did not contradict the argument of his lawyer that Ogundeji was a law-abiding citizen, who did not jump the administrative bail earlier granted him by the police and another bail granted him by a magistrate’s court where he was first taken.

The judge also affirmed the argument of Fatiregun’s lawyer, Ojo, who described as speculative the claim by the state that Fatiregun, who was not resident in Lagos State, might flee the court’s jurisdiction if granted bail.

Justice Lawal-Akapo agreed with the submission of the counsel for the 2nd defendant, Chief E.L. Akpofure (SAN), who argued that “speculation has no place in law.”

The judge said as none of the seven conditions for granting bail listed by the Court of Appeal was against the engineers, he was inclined to exercise his discretion in their favour.

He thus admitted each of Ogundeji and Fatiregun to bail in the sum of N10m each with two sureties in like sum.

One of the sureties, the judge said, must be a civil servant on not less than Grade Level 14, whose employment status must be confirmed by the Head of Service concerned.

The second surety, the judge said, must own landed property in Lagos State and must be willing to deposit the title document with the court.

The court said the surety must show evidence of three years tax clearance by the state, as well as supply his utilities bills and other documents authenticating his residential address.

The judge said the chief registrar of the court must verify the suitability of the sureties to stand for the accused persons.

He also ordered the accused person to deposit their passports with the chief registrar pending the conclusion of trial.

Further proceedings in the case were adjourned till May 19, 2016 when the state is expected to open its case.