President Obama Says Donald Trump Is Not Equipped to Be President 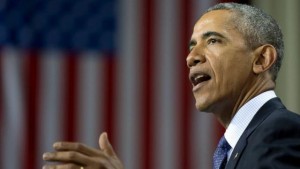 President Obama says that Republican front-runner Donald Trump is not equipped to deal with the challenges of being president.

“I think that he is not somebody who even within the Republican Party can be considered as equipped to deal with the problems of this office, but look, we live in a democracy,” President Obama said in an interview Monday with WMUR, an ABC affiliate in New Hampshire.

If Trump does become the Republican nominee, Obama said he’s confident that the Democratic nominee will win in a general election match-up.

“If in fact the Republicans nominate Mr. Trump, then it’s going to be an interesting fall season,” he said. “I’m confident that ultimately the Democrat in that circumstance will win.”

The president has not been shy about criticizing the Republican front-runner, most recently roasting him at the White House Correspondents’ Dinner on Saturday night.

“They say Donald lacks the foreign policy experience to be president. But in fairness he has spent years meeting with leaders from around the world: Miss Sweden, Miss Argentina, Miss Azerbaijan,” the president joked.

Trump is the only remaining Republican presidential candidate with a viable path to clinch the Republican nomination with pledged delegates ahead of the Republican convention in July. In Indiana, which holds its primary on Tuesday, a recent NBC/Wall Street Journal poll showed Trump in the lead.