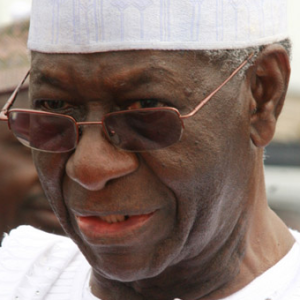 The report making rounds that former Peoples Democratic Party (PDP) Board of Trustees chairman Chief Tony Aneni has passed away, after a losing the battle with cancer,has been refuted…but negative comments about his life and times is mounting per seconds on social media by those who thought he is dead,inpite of the African thinking that you do not speak ill of the dead.

Media personality, Dele Momodu,among others has debunked news making the rounds on social media that former Chairman of PDP’s Board of Trustees, Tony Anenih has died. Some online media platforms reported that the 82 year old politician died suddenly at his home in Benin City today. According to Dele Momodu, he placed a call to the politician this morning.

Chief Anenih, 82, slumped on Sunday while having his breakfast at his Durham Broadway private London house after being recently discharged from the hospital.

The veteran politician had suffered a stroke last month and he had to be rushed to West Brompton Hospital.

Anthony Akhakon Anenih was born in Uzenema-Arue in Uromi on 4 August 1933.

In 1951 he joined the Nigeria police force in Benin City. Working at home, he obtained secondary school qualifications. He attended the police college in Ikeja, and was selected for further training in the Bramshill Police College, Basingstoke, England in 1966 and the International Police Academy, Washington DC in 1970.

He served as a police orderly to the first Governor General of Nigeria, Dr. Nnamdi Azikiwe. He worked as an instructor in various police colleges, and in 1975 was assigned to the Administrative Staff College (ASCON), Lagos. He retired from the police as a Commissioner of police

He retired from the police as a Commissioner of police before going into politics. He was the minister of works and housing in 1999 before becoming the Chairman of the PDP Board of Trustees.

He was married to Josephine Anenih

As the rumour mills went agog yesterday about the health status of Chief Tony Anenih, the Iyasele of Esanland and former chairman of the Baird of trustees of the PDP his friends and associates denied the rumour doing the rounds that he has passed away.

The social media on Wednesday had reports that the elder statesman who is currently in abroad on health grounds, died of cancer in a London hospital.

Edo State chairman of the PDP, Chief Dan Orbih, and a former youth leader of the party in the state, Barrister Vincent Akhere; described the claims as total fabrication and handiwork of mischief makers.
Barrister Akhere said he spoke with Chief Anenih on phone on Wednesday morning adding that Chief Anenih travelled to London on Tuesday and that he would be back in the country weekend.

“I spoke with him on phone about 15 minutes ago. Chief is well, alive and kicking. We even joke over the matter. It is true that Chief had a surgery not too long ago but is fine now.”

Chief Orbih simply said that the rumour was unfortunate, adding that the people behind it should ask God for forgiveness.
Many Nigerians took to social media to react to the alleged death of the politician. Tony Anenih is dead. May he find peace in the Lord — DEJI for DNPS PDP (@Gomeznsude) May 4, 2016
Bernard Benson: “One criminal is dead we are anticipating more of them,remain Jonathan,dastardly men who did not want their citizens to enjoy and emancipation of their father’s land because of their selfcenternesses.”
Jibril K Abdullahi: “Rest in hell wicked man this man is too corrupt he deny us our rite when he was a BOD in NPA but God is not human this is the end of it we will all die one but try and b good to odas.”
Abu Abass Usman: “How much of our looted money will he go to heaven ( or is it hell ) with. We should always remember a day like this.”
Bruno Iyke Ikenga: “Where is all the Money he stoled from the poor Biafran people. I wish he burn in hell.. Soon Obj, Ibb, Buhari will follow … No peace for the wicked, according to the natural justice.”
Victor Okorie: “Rest in peace. Did he go with all the billions he keep for himself?”
David Tayo Olomo: “Good riddance to bad rubbish like him. This is just the beginning
.” Ikechukwu Ojukwu: “What a painful exit.”
Akingboye Olawale: “Mr fix is gone.”

Adamu Ado Kafi: “May his soul rest in peace

thank God he is alive and last news about his demise is false.

Come to think of it, of what importance is he to us?…….. Make him pass jare!

Let all the EVIL Men/Women go abeg.
They all should fucking KAPUT already.