Budget signing won’t change anything –Economist, Henry Boyo is warning nigerians not to be overly excited about the budget of change… 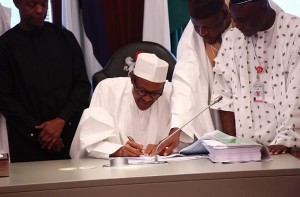 ‘Every year, the media celebrates the budget passage as if the only problem with the economy is because it had not been signed. In most cases, the budget is normally passed around April or May. Even when it is eventually passed, life continues as normal and nobody sees any difference.

The expectation of many is that once the budget is signed, a new life comes. But it is never so in most cases. So, why people keep sustaining that expectation is what totally baffles me, because it never happens that way.

The budget will be passed, and there is nothing different between what they are doing now and what they have done in the past, because we have never seen the result. It has never impacted in any way, if anything, our people have continued to grow poorer. In any case, why must you pay so much attention to the budget when the recurrent expenditure is being spent all along? It’s only the capital expenditure, which is only about N1.8tn, that makes the difference, and it will not be released at a go; it will be released in tranches.

So, the expectation, as created by the media, that implementation will happen immediately after it is signed is neither here nor there. The amount we are talking about is only about N1.8tn for capital expenditure, so why are people clapping as if that is what will transform our lives? We have left the important things behind. The media should be ringing the bell on a daily basis as to why the Central Bank of Nigeria keeps mopping up excess liquidity, where does the money come from, why does the government have to borrow money when it also mops up excess liquidity, why is government saying it is making intervention in the real sector when in fact they are depriving the real sector from borrowing, through high cost of funds? These are the realities we should approach.

The truth is that if we don’t address these issues, you just find that nothing has changed. In reality, the determinant of economic progress and the possibility of saving people from poverty will not be based on signing the budget but it will be based on the indices of monetary policy.

My expectation from the budget is zero because it is dependent on loan. The budget has no proper economic logic. It was planned without an appreciation of the present high debt situation of the country, and therefore capable of leading the country to a debt crisis.

The National Assembly has passed that budget but the consequences cannot be avoided because once we do the wrong thing, we must expect the wrong result.

In addition, the budget is coming five months late, which is an indication of inefficiency and ineffectiveness of the current Federal Government. We just need to be proactive as a people if we truly desire development. We need to seek the thing that will help us achieve our national development and promote them.

This 2016 budget is negative to national development; it is fundamentally perverted and can only lead this country to severe economic crisis. It is the most wasteful budget Nigeria has prepared since 1999. It has the highest level of recurrent expenditure. I have not seen the signed version, but I have seen what was proposed. What was proposed is very destructive to national development. The budget has a level of national deceit because part of the justification is that we are borrowing to fund infrastructural development.

We have lost this year –Spokesperson, Afenifere, Yinka Odumakin

The imbroglio over the budget for about five months was quite unnecessary. As it is, we have practically lost this year. The rains are here now and so I don’t know which job the Ministry of Works wants to do on any road.

There is a clear danger in the land for the fact that the economy is crumbling. A few days ago, an Italian in the country closed down his factory with all 400 Nigerian workers losing their jobs. A similar thing is also happening in almost every sector of the economy. If care is not taken, we might find it very difficult to arrest the decline being witnessed in the economy.

I would therefore advise the government to sit down and see how they can salvage the situation otherwise we could be in for a serious problem. Funding the budget now is still a major issue that needs to be addressed. I fear that we have lost 2016; so the government should begin to prepare in earnest for 2017 to prevent such from happening again. A nation shouldn’t go through this type of thing twice.

Intrestingly,The Federal Government has ruled out the possibility of full implementation of the 2016 Appropriation Act signed into law by President Muhammadu Buhari on Friday.

The Minister of Budget and National Planning, Senator Udo Udoma, stated this while briefing journalists shortly after Buhari signed the budget at the President Villa, Abuja.

Udoma was joined at the briefing by the Minister of State for Budget and National Planning, Zainab Ahmed.

The minister admitted that having been signed late into the year, it would be impossible to achieve full implementation of the budget.

He said, “Our own will always be 100 per cent implementation. We know that because we started late, we may not achieve it but that is our aim.

“We will start off with that aim because the budget is a law so we will try and implement it as faithfully as we can. However, the reality is that we may not (achieve it) because we started late.

“In subsequent years, we will start earlier to give us a better chance of implementing the budget in full. But we will do our best.”

The minister also said the government would work hard to ensure that the National Assembly gets the 2017 budget proposal by October so that it could be passed before the end of the year.

This, he said, would afford the government the opportunity of implementing from January to December.

The minister said, “Two weeks ago, the ministry presented a memo to the Federal Executive Council and got approval for a timetable for the budget. So, as we are finishing with this budget, we are starting on 2017.

“Our intention is that the budget should reach the National Assembly early in October to give them enough time to pass it before the end of the year.

“The most important time for road construction is the dry season. So, if you can get the budget in December, you can now start early to implement. Our intention is to get us back to a situation where we can have a full January to December implementation for the budget.

Giving more details on the signed budget, Udoma said the budget size that the legislature came out with was just slightly lower figure than the one submitted by the executive.

He said the revenue assumption from the budget as passed by the National Assembly was the same, having adopted the same $38 crude oil price.

The minister also said the size of the budget and size of the deficit were about the same.

According to him, the budget puts the production figure at 2.2million barrels per day.

Ahmed on her part recalled that two weeks ago, the Federal Executive Council approved a monitoring and evaluation framework which was meant to guide the implementation of the budget.

She said, “We have developed a specific implementation guideline for the 2016 budget which will be submitted to all the ministries departments and agencies.

“This will be vigorously monitored and reported upon on quarterly basis to the FEC. There are some checks in that implementation plan and we intend to follow through with the plan as fast as possible.”