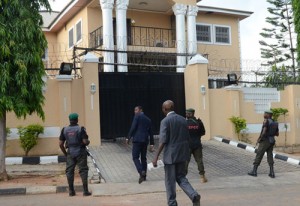 Facts have emerged on why EFCC stormed fani’s house in a suprising manner..It is to prevent him from tampering with any prove of evidence ahead of time. A team of Economic and Financial Crimes Commission (EFCC) operatives yesterday stormed the Abuja residence of former Aviation Minister Femi Fani-Kayode.

It was ostensibly a move to arrest him in connection with the N2.5 billion allegedly withdrawn illegally from the Central Bank of Nigeria (CBN) and paid into the accounts of six chieftains of the Peoples Democratic Party (PDP) and the Goodluck Support Group (GSG).

The operatives arrived the gate of the building a few hours after the anti-graft agency formally served him a summons to present himself for interrogation on Monday.

Fani-Kayode is suspected to have received N840 million of the slush funds allegedly disbursed for the 2015 Presidential campaign of former President Goodluck Jonathan.

Former Finance Minister Nenadi Usman and ex-Imo State Governor Achike Udenwa, both of whom also got from the funds, have already had their own sessions with EFCC interrogators.

Nenadi is believed to be the operator of an account named Joint Trust Dimension Nigeria Limited, where a substantial part of the funds was lodged and disbursed to party chieftains.

The EFCC action followed an intelligence report, a source told The Nation.

He gave no details but merely said:”We have been looking for him and now that we have located him, we mobilised our men to effect his arrest.

“It has become necessary to arrest Fani-Kayode before his interrogation begins on Monday. Some of those involved in the N2.5 billion scandal are already with us.”

On sighting the EFCC team, the former minister took to the social media to alert his Facebook friends about the development.

He said:”Today (yesterday), the EFCC invited me to come to their office on Monday. I have their letter. I agreed to be there. Now they have surrounded my house.

“The letter of invitation was served this morning and it was dated May 6. They said I should report on the 9th. Can someone please tell me why they are at my gate? They can’t even wait because they want to detain me so badly and keep me away for the weekend.

“I never refused their invitation. Why all this? I leave them to God.”

The operatives however took their leave as journalists began to gather to record the development.

In inviting Fani-Kayode for questioning on Monday via a May 6,2016 letter, the Acting Head, CTGI / Pension Fraud Section, Mohammed Umar Abba, said: “This Commission is investigating a case of criminal conspiracy, fraud and money laundering involving Joint Trust Dimension Ltd, in which you featured prominently.

“In view of the above, you are requested to kindly report for an interview with the undersigned, scheduled as follows: Monday 9th May, at Block B, Idiagbon House, 5 Fomella Street off Adetokunbo Ademola Crescent, Wuse 11 Abuja by 10 am.

“This request is made pursuant to Section 38(i) of the Economic and Financial Crimes Commission (Establishment) Act 2004 and Section 21 of Money Laundering (Prohibition) Act, 2011.”

Preliminary findings by EFCC indicated that the said N840 million was paid in three tranches into the former minister’s account.

“Next in the pecking order of beneficiaries of the heist was Goodluck Support Group which received N320 million.

Chief Falae allegedly received N100 million through Marreco Limited, a company of which he is Chairman. The fund was credited into the company’s United Bank for Africa Plc account No. 1000627022 on March 25, 2014.

Fani-Kayode’s account remained frozen at press time and will be so until investigation is concluded.

The former minister said yesterday before his arrest that he was ready to honour the EFCC invitation.

His media aide, Jude Ndukwe, issued a statement in Abuja saying: “The EFCC wrote a letter of invitation to my principal, Chief Femi Fani-Kayode, this morning, asking that he reports to their Abuja office on the morning of May 9th for a discussion.

“The letter was dated 6th May 2016 and it was signed by one Mr. Mohammed Umar Abba on behalf of the Acting Chairman, Mr. Ibrahim Magu.

“This is the first and only letter of invitation that Chief Fani-Kayode has received from the EFCC and it puts a lie to the shameful allegation that was being peddled around by The Nation newspaper that he had been served with an earlier invitation which he had shunned and that he was running and hiding from the Commission.

“The letter of invitation was delivered to his Abuja home and he has responded promptly through his lawyers by assuring the EFCC that he would make himself available on Monday morning to assist in their investigations”.

Soon after the departure of the EFCC team, the former minister confirmed on Facebook that “After 8 hours, the massive siege on my home has been lifted. The EFCC has left my gates and I look forward to my date with them at their office on Monday.”