Why I’ll not contest against Buhari in 2019 — Okorocha 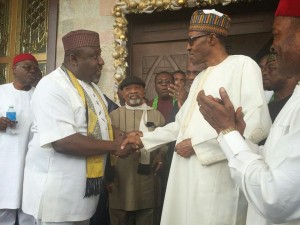 The governor of Imo State, Chief Rochas Okorocha, has said that he will not contest against President Muhammadu Buhari in 2019.
Okorocha, who is the chairman of APC Governors Forum, said since assumption of office, Buhari had exhibited unparalleled leadership qualities.

Okorocha was among APC chieftains who challenged Buhari for the presidential ticket of the APC ahead of 2015 elections.
Other contenders were former vice president Atiku Abubakar and former governor of Kano State, Sen Rabiu Musa Kwankwaso among others.
Okorocha, while answering questions from  pressmen after conducting them round some projects in Owerri,  said his  long-time desire for the presidency of the country had been to provide the much needed leadership.
He said so far, President Buhari had shown that kind of courageous, visionary and people-oriented leadership, adding that the best bet for him (Okorocha) at the moment, was to encourage and support him (Buhari) to vie for a second term in 2019.
He said barely one year after coming to power, the doors of the world had been opened for Nigeria because the new president had shown courage, confidence, maturity and strong leadership.
“What the president therefore needs in the circumstance is to be supported and encouraged to continue the good work even after 2019. For that reason, I have decided to keep my presidential ambition aside,” he said.
2019 presidency buhari rochas okorocha slideshow 2016-05-09
Younews Ng
Share

Previous Dangote To Feed IDPs During Ramadam
Next Lagos state rakes in N101.69billion in first quarter of 2016