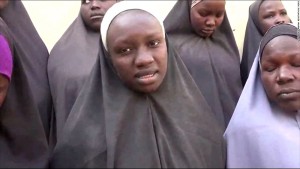 Nigerian soldiers have found One of the 219 schoolgirls kidnapped from Government Secondary School, Chibok in Borno state,, her uncle says, describing her as pregnant and traumatized but otherwise fine.

Amina Ali Nkeki is the first of the 219 Chibok girls to be freed since the mass abduction that grabbed attention around the world more than two years ago.

Tunji Olarenwaju, a member of the strategic team of the Bring Back Our Girls (BBOG) movement, on Wednesday, that members of the civilian joint task force (CJTF), a local vigilante outfit, found the girl identified as Amina Nkeki in Sambisa forest.

He said the chairman of the parents of the kidnapped Chibok girls confirmed this to members of the BBOG on Wednesday.

“The abducted Chibok girl, Nkeki, from Mbalala, a community in Chibok,was found in Kulakaisa area at the fringes of Sambisa forest by vigilantes from Chibok on patrol on Tuesday,” he said.

“That she is already breastfeeding a child, all of them are still in the Sambisa forest, six were already dead, they are well secured and protected for Nigerian army to penetrate and she has been taking to troops at Damboa after verifying her to the Chibok Community at home.”

A total of 276 girls were abducted on April 14 2014, while 57 managed to escape, the remaining have been in captivity.

Nkeki is the first Chibok girl to be rescued.

News of the rescue was confirmed to the BBC by Nigerian university teacher and women’s activist Hauwa Abdu.

Sources told the BBC she came from the town of Mbalala, south of Chibok, from where 25 of the kidnapped girls came. A neighbour in Mbalala told the BBC that Amina was found with a baby.

An uncle, YaKubu Nkeki, told Associated Press news agency that Amina was later reunited with her mother in Chibok.

She is expected to be moved soon to Maiduguri, the capital of Nigeria’s Borno state.

In recent days, Nigerian media reported that the army had launched a number of operations against Boko Haram in the Sambisa Forest.

Nigeria’s military has not yet commented on the latest raid.

During the 2014 attack, the gunmen arrived in Chibok late at night, then raided the school dormitories and loaded 276 girls on to trucks.

Some managed to escape within hours of their kidnapping, mostly by jumping off the lorries and running off into the bushes.

In total, 219 girls remained missing before the first rescue.

A video broadcast by CNN in April 2016 appeared to show some of the kidnapped schoolgirls alive.

Fifteen girls in black robes were pictured. They said they were being treated well but wanted to be with their families.

The video was allegedly shot on Christmas Day 2015 and some of the girls were identified by their parents.

The Chibok schoolgirls, many of whom are Christian, had previously not been seen since May 2014, when Boko Haram released a video of around 130 of them gathered together reciting the Koran.