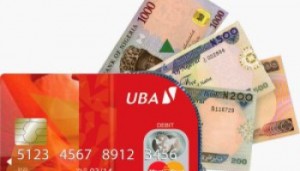 United Bank for Africa  is doing well in terms of real growth,  a report by the Financial Derivatives Company indicated.Despite the macroeconomic headwinds hitting the country in the past two years, the United Bank for Africa increased its shareholders’ equity by an annual growth rate of 22 per cent between 2011 and 2015.

The pan-African lender also recorded a compound annual growth rate of 19.3 per cent in its net interest income within the period.

The report further stated, “In spite of all these adverse conditions, UBA has shown its resilience as reflected in the ability to maintain profitability and ensure a high asset quality. Its PAT increased by 24.5 per cent in full year 2015 and remained flat in Q1 1916.

“The bank also maintained its non-performing loan ratio at 1.7 per cent, an industry benchmark. UBA’s superior risk management framework helped ensure subdued impairment effects from oil and gas exposures. Its share price has declined by about 20 per cent due to investor concern and pervading economic uncertainty.”

It added, “Given UBA’s revenue potential, recent performance, extensive network and branch system, large customer base, robust risk management framework and exceptional management, it is a company with an immense upside. Accordingly, we place a BUY rating on the stock.”

According to the FDC report, UBA’s growth through the years can be seen in key financial metrics between 2011 and 2015.

During that period, total assets and shareholders (attributable to owners) have grown by a CAGR of 9.4 per cent and 21.9 per cent, respectively.

In its analysis of the lender, the FDC said, “We derived our valuation for United Bank for Africa Plc using the dividend discount model method. Our fair value estimate for UBA Plc is N5.31, which is a 56.2 per cent upside on its current share price of N3.40 as of 09 May, 2016.

“The discount rate used in the DDM is the cost of equity (20.7 per cent), which is computed via the capital asset pricing model. The terminal P/BV, which is factored into calculating for exit multiple, was derived using the formula (Return on Equity (ROE) – Net Income Growth)/ (Cost of Equity – Net Income Growth).

“The intuition behind using this formula is considering how much of UBA’s ROE is being allocated to grow dividends and how much does it cost. Based on this intrinsic valuation, UBA is an undervalued stock with a potential for significant appreciation.

“In forecasting UBA’s assets and earnings, we took into account the low oil price environment, possible devaluation and the overall macroeconomic condition. These issues, alongside Nigeria’s monetary policy uncertainty, are major investor concerns.”

UBA had on Tuesday announced the appointment of five new executive directors to its board, subject to the approval of the Central Bank of Nigeria.

“All (the new EDs) bring considerable experience to the board and, as a sign of the depth of internal talent and the group’s commitment to fostering promotion of its own human capital; all have been promoted from within the bank,” the statement said.

Commenting on the appointment, the Group Chairman, Mr. Tony Elumelu, was quoted as saying, “These appointments will greatly assist in the plans we have to transform the UBA Group into a truly customer led bank and the foremost financial institution in Africa”.

“These are exciting times for UBA. And with this leadership, I have no doubt that the bank will continue on its strong growth trajectory.”

The lender in March appointed Mr. Kennedy Uzoka as its incoming Group CEO. Uzoka will assume this role on August 1, on the retirement of Phillips Oduoza.