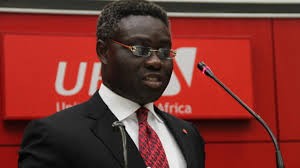 Analysts have unanimously placed a BUY rating on the stock of United Bank for Africa Plc (UBA), the lender with 19 branches across Sub Saharan Africa, amid creeping inflation, forex uncertainty, rising unemployment and bleak economic prospects

The recommendation is on the back of the lender’s ability to consistently growth earnings in the last four years while intensifying on its risk management strategy despite exposure to the oil and gas.

There was also a significant improvement at the top lines in the first quarter of 2016, thanks to a reduction in interest expense amid a high interest rate environment

The Nigerian lender did not only remain profitable but also maintained steady growth at the bottom line since reverting from a loss position in 2011. Net income surged by 24.25 percent to N59.65 billion in December 2015 as against N47.90 billion as at December 2014. However, profit was flattish in the first quarter of 2016 at N16.90 billion. “In  spite  of  all  these  adverse  conditions,  UBA  has  shown  its resilience  as  reflected  in its ability  to  maintain profitability and ensure a high asset quality. Its PAT increased by 24.5% in FY 2015 and remained flat in Q1’16.  The  bank  also  maintained  its  non-performing  loan  ratio  (NPL)  at  1.7%,  an  industry  benchmark,”  said analysts at Financial Derivative Company in a recent note to BusinessDay.

“Its  share  price  has  declined  by  about  20%  due  to  investor  concern  and  pervading  economicuncertainty. Given  UBA’s  revenue  potential,  recent  performance,  extensive  network  and  branch system,large  customer  base,  robust  risk  management  framework  and  exceptional  management,  it  is  a  company with an immense upside. Accordingly, we place a BUY rating on the stock,” said analysts at FDC.

Indeed the conditions are adverse as the economy of Africa’s largest oil producer is struggling with a drop in oil price by more than 60 percent to $42 a barrel. Oil accounts for two thirds of government revenue and nearly all of foreign exchange earnings.

As a result of the dwindling oil price and restrictions imposed by the Central Bank in order to curb inflation, the country’s real Gross Domestic Product Growth (GDP) growth rate touched -0.36 percent, in Q1 2016, which is a shocking drop from 2.11 percent in Q4, according to data from the National Bureau of Statistics (NBS).

The dismay figure came out days after the NBS data released inflation figures for April that showed consumer price index rose further to 13.7 percent in April from 12.7 percent in March and 11.4 percent in February

Analysts attribute the rising inflation to increase in the price of gasoline caused by fuel scarcity as petroleum oil marketers were unable to import products due to the unavailability of foreign exchange.

The banking industry was hard hit by the persistent macroeconomic headwinds that have weakened consumer purchasing powers and eroded earnings of companies including banks.

Lenders in Africa’s most populous nation are struggling with reduced credit growth due to lower loans demand, higher impairments from oil and gas exposures, and increasing regulatory capital requirement.

Despite pressured consumer discretionary spending and slow retail business as a result of economic lethargy =, UBA maintained a steady loan growth. Between 2011 and 2015, gross loans and advances has grown by a CAGR OF 14.40 percent while deposits from customers increased by a CAGR of 9.50 percent between 2011 and 2015.

During that period, total assets and shareholders (attributable to owners) have grown by a CAGR of 9.4 percent and 21.9 percent, respectively

NPLs one of the lowest in the industry

UBA maintained a well diversified assets base and excellent risk management strategy given its favourable Non Performing Loans (NPL) of 1.7 percent in the period under review, a reduction from 2.50 percent recorded the previous year.

“Though the downturn in the oil & gas sector has led many banks to impair loan assets belonging to oil & gas firms that have issued servicing their obligations, UBA’s total oil & gas exposure of 19.2% has limited its asset write-offs on its loan books. Its non-performing loan (NPL) ratio of 1.7% is one of the lowest in the banking industry, and it underscores the bank’s commitment to a sophisticated and enhanced risk management structure,” said analysts at FDC

Be it as it may, the second quarter is going to be tougher than the first for banks as the recent fuel scarcity may further spike inflation and thus constrain consumer wallets and dampen deposits from customers.

Additionally, the foreign exchange restriction imposed by the central bank culminated in businesses closing shops and downsizing as they were unable to source dollars to settle suppliers of raw materials.

All this add together means the apex bank may decide or be forced to hike interest rate in order to curb rising inflation. And when this happens, Nigerian banks should brace up for a high interest rate environment.

Also, business expansion will be crimped since lenders will extend credit at a high interest rate to customers and small scale businesses. If this scenario present itself, it means an economy in near recession will be in a precarious situation.

“Persistently low oil prices could lead to a further impairment of UBA’s oil & gas loans. Besides its impact on oil & gas companies, the low oil price regime has impeded economic growth, thereby hampering banks’ ability to grow loans. UBA also has one of the highest exposures to the power sector (9.8%),”said analysts at FDC.