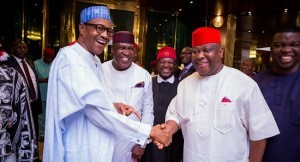 President Muhammadu Buhari on Tuesday met behind closed doors with some politicians from the South-East region of the country.The meeting was held inside the President’s office at the Presidential Villa, Abuja.

The politicians, who visited under the aegis of the South-East Group for Change, were led by a former President of the Senate, Ken Nnamani.

The meeting came barely 24 hours after no fewer than 30 persons and a soldier were allegedly killed  in Onitsha, the Anambra State capital, after some pro-Biafran protesters, said to be celebrating the 50th anniversary of the declaration of the defunct Biafra Republic, engaged soldiers and policemen in bloody clashes.

Other prominent politicians in the delegation included Senators Ifeanyi Ararume and Osita Izunaso; a former member of the House of Representatives, Sharon Ikeazor; a former Executive Vice-Chairman of the Nigeria Communications Commission, Ernest Ndukwe; National Vice-Chairman, All Progressives Congress in the South-East, Mr. Emma Eneukwu; a member of the APC Board of Trustees, Chief Austin Edeze; Dr. Uzoma Obiyo; and Chris Akomas, among others.

The Chief of Staff to the President, Abba Kyari, and some other top government officials joined Buhari to receive the group.

The President’s guests were conveyed to the Presidential Villa in a bus belonging to the Ken Nnamani Leadership Institute based in Abuja.

They did not speak with State House correspondents at the end of the meeting which lasted for about 30 minutes.

Shortly before he met with the delegation, Buhari had also granted an audience to some state governors.

None of the governors spoke with reporters at the end of the meeting.

Meanwhile, the Inspector-General of Police, Mr. Solomon Arase, has ordered senior officers in the South-East and the South-South geopolitical zones to immediately disarm members of the IPOB and charge those arrested with murder.

The IG said this in a statement by the Force Public Relations Officer, Olabisi Kolawole, while reacting to the killings of policemen by some pro-Biafran activists on Monday.

The statement read, “Following the manifestation of the disposition of the armed Independent People of Biafra activists to undertake premeditated attacks on police officers engaged in operations aimed at restoring public order in states in the South-East and South-South geopolitical zones of the country, the Inspector-General of Police, IGP Solomon E. Arase  has directed the Assistant Inspectors-General of Police and the Commissioners of Police in the affected area to disarm members of the group from operating firearms immediately.”

Arase noted that the targeted attacks on police personnel portrayed the IPOB activists, who were orchestrating  insurrection, as having crossed the threshold in their attempt to test the common will of the nation.

“IGP Arase, while condemning the killings by members of IPOB, also directed the arrest of any member of the group found in possession of a firearm and bring him or her to justice, while all IPOB activists, arrested in connection with the killing of the policemen, should be charged to court with murder,” the statement added.

Some members of the Movement for the Actualisation of the Sovereign State of Biafra, who were arrested on Monday while celebrating the 50th anniversary of the declaration of the defunct Biafra Republic, were arraigned by the police in Enugu on Tuesday.

The pro-Biafran agitators were rounded up by police operatives around Zik Avenue and Edinburgh Street, in the Ogui area of Enugu, on Monday.

Thirteen MASSOB members were arraigned before a magistrate court in Enugu on Monday.

In the charge, numbered 245C/2016, the secessionists were accused of belonging to an illegal society “called MASSOB”.

The police said the offence was punishable under Section 495(a) of the Criminal Code, Cap 30, Volume 11, Laws of Enugu State of Nigeria, 2004.

The MASSOB members were also accused of taking part in an unlawful assembly, thereby committing an offence punishable under Section 106 of the Criminal Code, Cap 30, Volume 11, Laws of Enugu State of Nigeria.

However, the Biafran activists pleaded not guilty after the charges were read out to them.

The presiding magistrate, E. N. Alukwu, thereafter, granted the MASSOB members bail, and adjourned the matter to June 23 for hearing.

The pro-Biafran activists were remanded, pending the time they would meet the bail conditions.

Also, in Ebonyi, no fewer than 88 members of MASSOB were arraigned at a Magistrate’s Court sitting in Abakaliki, the Ebonyi State capital, on Tuesday, for unlawful assembly and breach of the public peace.

They were charged with unlawful assembly and belonging to an unlawful organisation by the Nigeria Police.

Biafran agitators in the state had, on Monday, accused the police of arresting and molesting over 320 of their members, during an interdenominational church service marking the 50th anniversary of the declaration of the defunct republic in Abakaliki.

However, the separatists who were represented by more than seven lawyers, led by Eze Enyi, pleaded not guilty to the charges against them.

Among those arraigned were five pastors, who held firmly to their bibles in the courtroom.

Enyi, who applied for their bail, also urged the court to transfer the underage ones to juvenile/family law court.

The trial Magistrate, Stella Ogoke, granted the 88 defendants bail in the sum of N500,000  with seven sureties, who must either be civil servants or businessmen resident in Abakaliki.

The trial judge also directed that the underage defendants be transferred to the juvenile/family law court as pleaded by the defence counsel.

The matter was adjourned till July 18 for definite hearing.

Also, MASSOB has demanded the release of the corpses of its members as well as other pro-Biafran activists, who were killed in clashes with security agencies in the course of the Monday’s ill-fated rallies.

MASSOB, in the same breath, warned that the agitation for Biafra could take a violent turn due to what it described as “unprovoked killings” of pro-Biafran activists by the security agencies.

The group also demanded an unconditional release of pro-Biafran agitators who were arrested by the police during the event, which held in various cities of the South-East and South-South.

MASSOB National Leader, Uchenna Madu, demanded the release of the remains of the slain activists in a statement made available to our correspondent on Monday.

He also called for the release of leaders of the pro-Biafran movement, including the leader of the IPOB, Nnamdi Kanu; the leader of the Biafra Zionist Federation, Ben Onwuka; Benjamin Madubugwu, David Nwawuisi, and 23 others detained at Awka and Onitsha prisons.

He added, “Yesterday’s brutal onslaught against the people of Biafra is an indirect call and reminder that the non-violent Biafran agitators should start the militant way in Biafran restoration.

“Today, Nigeria’s economy is bleeding because of the intimidating and consistent activities of the Niger Delta Avengers.

“MASSOB condemns the brutalities and unprovoked killing of non-violent Biafran agitators during the annual anniversary of Biafra declaration, mostly in Anambra State.”

The Biafran organisation, in the same vein, blamed the Governor of Anambra State, Willie Obiano, for the attacks by security agencies on the agitators in the state.

The group equally chided “key” Igbo leaders for not speaking out against the killings.

In its reaction, the apex Igbo socio-political organisation, Ohanaeze Ndigbo, on Tuesday condemned the killings of pro-Biafran activists on Monday.

The association said it had convened an emergency meeting of its ‘Imeobi’, the highest decision-making organ, over the development.

The planned emergency meeting is to consider the “next step” the association would take over the matter.

President-General of Ohanaeze, Chief Enwo Igariwey, disclosed these to The PUNCH on Tuesday, saying it was wrong for the security agencies to use “excessive force” against unarmed civilians.

“We think it is inappropriate to use excessive force that will result in the death of so many people.

“We are going to convene an emergency meeting of the Imeobi to know the next step to take,” he stated.

Also, the Deputy President of the Senate, Senator Ike Ekweremadu, on Tuesday, condemned the reported killing of some pro-Biafran protesters on Monday.

He stated this at plenary, when he came under Order 43 of the Senate Standing Rule, to draw the attention of the Upper Chamber to the “bloodbath” in the South-East region of the country on Monday.

He urged the Senate to note that the country had recorded so much bloodshed in various parts of the country, stating that security agencies must apply caution in quelling perceived disturbances in any part of country whatsoever so as to prevent young men and women from being sent to their untimely graves.

He said, “Yesterday, I had a number of calls about the disturbing clashes between youths in different parts of the South-East, South-South and security agencies, leading to the death of many people, both of the young men and security personnel.

“It is important that we rise to condemn any act of killing in any part of this country, especially the ones that concern the major part of our future, which remains the young men and women of this country.

“We are now in a democracy and people should be entitled to speak their minds; to assemble under responsible and lawful circumstances; and the security agencies must also be responsible in dealing with those circumstances to ensure that lives are not lost unnecessarily.”

In a similar vein, the Anambra State Government has asked security agencies to always exercise professionalism in quelling riots.

In a statement by the state Commissioner for Information and Communication Strategy, Tony Nnacheta, on Tuesday, the state alleged that hoodlums hijacked the Monday demonstration, causing it to turn bloody.

The statement read in part, “These elements infiltrated the demonstration and unleashed a wave of violent attacks on the police, burning down a patrol van and sowed panic among the populace.

“The Government of Anambra State shall not allow some unscrupulous elements to undermine our collective achievement as the most peaceful state in Nigeria and slow down our steady march to progress and prosperity.

“We therefore warn people, who are planning to foment trouble or hide under the guise of peaceful demonstration to disturb the peace, to desist from such acts with immediate effect as that will not be tolerated.”

A rights group, International Society for Civil Liberties and Rule of Law has described the alleged killing of several persons in Onitsha on Monday as a massacre.

In a statement by its Board of Trustees Chairman, Emeka Umeagbalasi, the group condemned the killing of the protesters, accusing the state governor, Obiano, and Buhari of culpability in the killings.