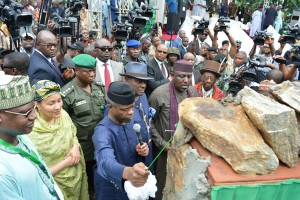 President Muhammadu Buhari yesterday sounded a note of warning that oil theft and illegal refining will not be tolerated.

He also charged regulators of the oil industry to ensure that oil companies operate within international standards.

The President spoke in Bodo, Rivers State when he inaugurated the clean-up of oil spill in Ogoni,  Rivers State. President Buhari was represented by Vice President Yemi Osinbajo.

The clean-up is part of the implementation  of the United Nations Environmental Programme (UNEP) report.

The President said: “Let me seize this opportunity to sound a note of warning that the current oil theft and illegal refining will not be “This administration is laying a foundation for change. The government places high emphasis on the diversification of our economy. This is to ensure that our economy is strong and capable of supporting our teeming young people, thorough job and wealth creation.”

The President also pointed out that the clean-up of Ogoniland is embedded in the programme, livelihood and sustainable development components.

”Today (yesterday) marks another milestone in the life of our administration. I recall the time as a military Head of State, when I visited Bodo Town in Ogoniland.

“During that visit, I commissioned a large fish pond and planted a tree as a sign for that government’s concern for the environment. Unfortunately, since then, the degradation of land, water and air has done huge damage to the fragile ecosystem of the Niger Delta, especially the Ogoniland.

“Oil exploration and production have been going on in Nigeria for six decades. Oil has given a boost to the Nigerian economy, but the ecosystem of the Niger Delta has been severely damaged. Fishing and agriculture have been badly affected.

“There were acts, enactment, laws, guidelines, regulations to govern the operators of the oil industry. However, either because of lack of will or wilful non-compliance with environmental laws, the environment was put in jeopardy.”

President Buhari also stated that in the various communities in the Niger Delta, the negative impact of oil production and lack of consideration for best practices sparked off the struggle for justice and fairplay in the conduct of business by oil industry operators.

He noted that quite unfortunately, the agitations led to loss of lives and property while international concern was raised, with past governments urged to take decisive steps to address the issues.

The President said: “The report (by UNEP) was submitted to my predecessor in office (Jonathan) in 2011, but the implementation was not accorded the necessary support it required. The people of Ogoni land continued to suffer from pollution of air, land and water.

“After listening to the address presented on behalf of the Ogoni people by Senator Magnus Abe (during his visit to Ogoni on January 8, 2015), we made a solemn commitment that if given the opportunity, we shall implement the UNEP report on Ogoni land. We are determined to put right the wrongs of the past, where the people of this land were treated unfairly and their environment unduly degraded.

“Today (yesterday), we are in Ogoniland, in the heart of the Niger Delta, to fulfil our promise to you and to bring justice and succour to our people. The clean-up of this land will require change on the part of all those who deal with the Niger Delta environment, particularly the oil companies and our communities. The tempo of this assignment increased when my cabinet was constituted.

“We are, therefore, laying a solid foundation today (yesterday) for the restoration of the fragile ecosystem of Ogoni land and the rest of the Niger Delta.”

Rivers State Governor Nyesom Wike assured that the state government would provide the required platform for the successful clean-up of Ogoni land and the implementation of the UNEP report.

“We acknowledge that this is a federal initiative. The direct impact is borne by our people. We therefore urge all our stakeholders to embrace and support this Federal Government’s gesture and ensure a hitch-free exercise.

“We, therefore, welcome this initiative wholeheartedly, as shown by our enthusiastic presence, believing that the recommendations of UNEP will be systematically executed. This is because we believe that only environmental justice would restore sustainable peace, stability and socio-economic progress in the Niger Delta.

“We commend Mr. President’s determination to close this ugly chapter in our country’s history. Although this has taken long in coming, it is never too late, when it comes to the environment. Mr. President sir, your presence in Ogoniland today (yesterday) is a testimonial of the long-awaited clean-up and remediation exercises of the Niger Delta polluted environment.”

Minister of Transportation and former Rivers State Governor Rotimi Amaechi, said his administration did everything,  but former President Goodluck Jonathan did not implement the UNEP report.

Gininwa said: “Jonathan is my boy. Jonathan made a mistake. He could not do what he promised (implementation of the UNEP report)”. He urged   President Buhari to re-award the contract for the completion of the abandoned Bodo-Bonny Road in Rivers State.

“I was then, by accident of God, the Director-General of Buhari Campaign Organisation. The day I was to go with the presidential candidate of the All Progressives Congress, APC, (Buhari) to Calabar and Delta State (on January 8, 2015), as we were taking two states per day, I saw a delegation of Ogoni people in my house and they requested that I should plead with the then Gen. Buhari to kindly see them in their natural habitat.

“That they (Ogoni people) wanted to receive him (Gen. Buhari) and make a demand. In spite of running late, Gen. Buhari agreed to come. He came to Ogoni and promised he would implement the UNEP report.

“We are gathered here today (yesterday) in keeping with that promise and economy of the Ogoni people will change. There is no way we will spend $1 billion that we shall not create employment. The micro economy will change.”

Amaechi  lauded Ogoni people for the chieftaincy title they gave President Buhari, to express gratitude for fulfilling his promise on the full implementation of the UNEP report.

UNEP Executive Director  Steiner confessed that he did not think that yesterday would come. He praised former President Obasanjo for the initiative, adding that the late renowned environmentalist, Ken Saro-Wiwa, and other Ogoni activists did not die in vain.

Bishop Matthew Hassan Kukah of the Sokoto Diocese of the Catholic Church, who was appointed by former President Obasanjo in 2005 as the mediator between the Ogoni people and the Shell Petroleum Development Company of Nigeria Limited said in spite of one thousand petitions written against him by Ogoni people, he was glad that the clean-up had begun.

Managing Director of SPDC Osagie Okunbor assured that the Anglo/Dutch oil giant would support the clean-up and contribute its share of the environmental restoration fund.

The Minister of Environment, Hajia Amina Mohammed, said  the kick-off of the  clean-up was in fulfilment of the promise made by President Buhari, stressing that the UNEP Report’s implementation would require partnership, trust, transparency and accountability.

Previous ‘Football Is My Life”- Lionel Messi defends himself at court trial
Next Militants Dare Military : Vacate N/Delta within 48 hours..Or Else… 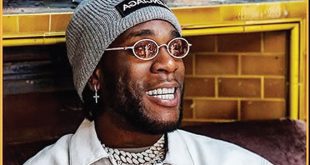