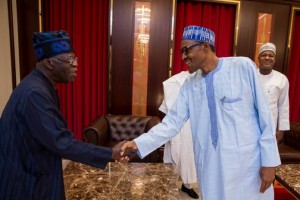 President Muhammadu Buhari has pointedly told a former Governor of Lagos state, Asiwaju Bola Tinubu that he is not the National Leader of the All Progressives Congress, APC, as the latter is widely upheld.

The President made this clarification last Monday while hosting APC chieftains and members of the National Assembly to a dinner where the Senate President, Bukola Saraki in observing protocol during a remark addressed the former Lagos governor as the National Leader of APC

A Senator who was at the event confided in our correspondent that “Buhari, who spoke shortly after Saraki, said; ‘Senator Bola Ahmed Tinubu, even though the Senate President addressed you as the National Leader of APC, you are not the national leader of the party. You are one of the national leaders of the APC.’”

The source continued that; “when Buhari told Tinubu that he was not ‘the national leader of the APC’ several APC members from the South-West roared in protest… but the President didn’t care… He was blunt and firm in his address.”

Tinubu started being addressed as the National Leader of the APC in the build up to the 2015 general elections, owing to what analysts believe is the role he played in the formation of the party. He however retained the title after the election to the dissatisfaction of some bigwigs in the ruling party.