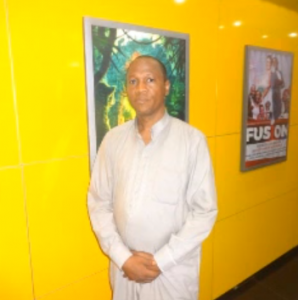 Dr Mohammed Sani Idiagbon, pictured above, who was the Head of Department of the University of Ilorin, has reportedly resigned from office after an audio where he was asking for sexual favors from one of his students named Faith, leaked online.

According to Sahara Reporters, who leaked the audio last week, Faith is a 200 level student of his department who had gone to him regarding her score for a continuous assessment test he set for her class sometime ago.

In the audio, Dr Idiagbon could be heard telling Faith to allow him touch her breast. Faith then told him that her breast is paining her because she was having her menstrual cycle. She also told him that the office was not conducive for such act. The lecturer then told Faith to lock the office door so they could have privacy which she did but still resisted his advances.

Angered by her reluctance, Dr. Idiagbon told her she is not the only one and so she should not feel so special and eventually told her to leave the office and not return.

Reacting to the incident, the University’s Director of Corporate Affairs, Kunle Akogun, confirmed the incident to Sahara Reporters, saying Dr. Idiagbon has resigned after he was suspended and removed as the head of the English department. He also refused to honor an invitation of the Staff Disciplinary Committee, choosing instead to resign.

Akogun further stated that the university is investigating the matter and will ensure that the lecturer is duly punished if found guilty of the allegations against him. In his words,

“The university frowns against sexual harassment or any other harassment at that. The university is making necessary investigation and once we are done, the culprit will be brought to book.”

The sub-dean of school’s student affairs, Dr. Yussuf, said the case was reported to the Students’ Support Centre shortly after the Easter break in April.