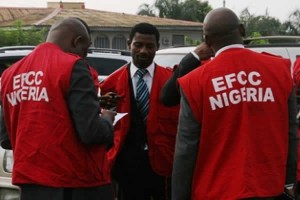 The Economic and Financial Crimes Commission has seized a terrace house belonging to a former acting Governor of Adamawa State, Umaru Fintiri. The house is located on No. 7, Gana Street, Maitama, Abuja.

One of our correspondents, who visited the house, was told that the property was worth about N500m.

The house had painted at its entrance the inscription, ‘EFCC, under investigation’.

Fintiri was arrested by the anti-graft agency 10 days ago following a petition by former members of his cabinet that he embezzled N1.9bn during the three months he acted as governor.

The suspect, who was the Speaker of the Adamawa State House of Assembly, became acting governor after the impeachment of the substantive governor, Murtala Nyako, and his deputy, Bala Ngilari, in 2014.

A source at the EFCC told one of our correspondents that Fintiri allegedly diverted the fund that was meant for the construction of the Faculty of Law at the Adamawa State University.

He said, “Before his impeachment, Nyako left a balance of N1,957,045,82 in the state government’s project account with the Yola branch of Zenith Bank, with account number 1011325467. Out of the money, N497m was meant for the construction of a law faculty at the university, which was to be sited at the former Teachers’ College, Yola.

“However, when Fintiri took over as acting governor, he transferred the proposed faculty from Yola to the Mubi campus of the ADSU and later laid the foundation; but after that, the project never took off.

“Investigations revealed that on Fintiri’s orders, part of the N1.9bn was released to the Ministry of Works and a contract was awarded to a construction company, Mayim Construction Limited, for the construction of roads in Mararaba Garta and Kamale in the Michika Local Government Area of the state. The company, we believe, is owned by Fintiri, which is illegal.

“The roads in question have not been constructed.”

The source added that Fintiri also purchased Highland Tea, a tea manufacturing company located on the Mambilla Plateau and jointly owned by Adamawa and Taraba states. The tea company owed N600m to the Bank of Agriculture, which Fintiri paid promptly and became its sole owner.

The source alleged that Fintiri, through his company, bought the assets of a firm, S M Nguroje Nigeria Limited, through the Bank of Agriculture for N650m

The property is a tea plantation and processing plant located in Taraba State.

“We believe that part of the N1.9bn was used in buying the tea plantation,” the source added.

The EFCC is also investigating a loan of N5bn taken by Fintiri as acting governor. It was alleged that the suspect took the loan without following due process.

Fintiri, the source said, would soon be charged to court.

However, a spokesman for Fintiri, who did not want his name in print, said the allegations were baseless, adding that all the contracts were awarded in accordance with the laws of the state.

He said Fintiri’s house was not seized but was only put under investigation.

He said, “The bids for the contracts were transparent and the ministries concerned duly advertised the projects for pre-qualification tender, which was not opened before Fintiri’s tenure ended.

“I think what you as a journalist should do is to find out why a suspect will be held for over 48 hours without being charged to court.”

Meanwhile, the Presidency on Saturday said efforts by the Muhammadu Buhari administration to recover funds stolen by former government officials as well as other individuals were a continuous exercise.

The Special Adviser to the President on Media and Publicity, Mr. Femi Adesina, said this in an interview with one of our correspondents.

Adesina was reacting to the criticism that trailed the release of the amounts so far recovered from suspected looters by the Federal Government.

The government said it had recovered a total of N115.7bn in cash, while assets worth over N1.9tn had been frozen in the last one year.

In a statement by the Minister of Information and Culture, Alhaji Lai Mohammed, the government said the recoveries were made between May 29, 2015 and May 25, 2016.

A conversion of the funds using the official exchange rate of the Central Bank of Nigeria showed that the recovered loot added up to N115,792,760,499.

But some individuals and groups alleged that the amount declared as having been recovered was not the actual amount returned by the suspected looters.

Adesina, however, said this was why the President made it clear that there would be regular updates on the recovered funds by the minister.

“Recovery of loot and declaration of same is a continuing process. The President made it clear in his May 29 broadcast that the Minister of Information would give continuous updates,” the presidential spokesman said.