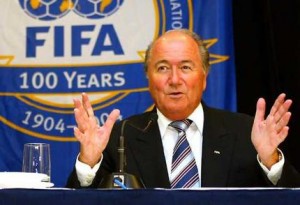 Sepp Blatter denies giving Argentina an easy draw at the 2014 World Cup, but claims he has witnessed fixes at UEFA level through the use of “cold and hot balls”.

Argentina were pitted against Nigeria, Iran and Bosnia-Herzegovina in Brazil two years ago, but the disgraced former FIFA president denied there was an intention to give the two-time world champions a favourable group.

However, Blatter alleges to have witnessed premeditated draws by Europe’s governing body, with refrigerated balls used to rig the outcome.

“I never touched the balls, which was something that others had to do. Of course, it can be signalled, by heating or cooling them.

“It’s technically possible. It did not happen in FIFA, but I witnessed draws at a European level in which it happened – but never in FIFA.

“It could have happened, but in my case it never did, ever.

“If you put the balls in the refrigerator before, a simple comparison between one and the other by touching them determines the cold and hot balls. By touching them you already know what it is.”

In March, Blatter lodged an appeal against a six-year ban from football with the Court of Arbitration for Sport.

Blatter, however, maintains his innocence.

“Blatter is not corrupt. You can try to find something, but you will not find anything that has violated any Swiss law … and no criminal law.”