FG Negotiating With Avengers Is The Best Solution -Kachikwu 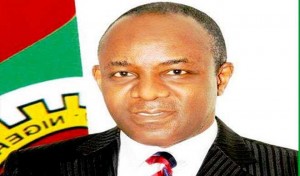 The Federal Government yesterday said it has not closed the avenues for negotiations with the new Militant group, the Niger Delta Avengers (NDA), saying it would explore every available opportunity for negotiation so that the NDA can stop the bombings of oil pipelines and platforms.

Kachikwu said there is no theatre in the world where conflicts have been resolved through a battle. He said his mandate as minister of state for petroleum is to protect oil production and to generate more revenue for the government.

He explained that on the part of the Federal Government, negotiating with the militant group is not an evidence of weakness of the military but that massively bombing a territory would not articulate a solution to the already exiting problems.

“It doesn’t matter who is right and who is wrong. I have too many objectives in this portfolio; one is to present production and generate the revenue because if we don’t, all the things we are talking about here will be just a joke.

“I believe that massively bombing a territory is not going to articulate solution. It has never worked because at the end of the day you will leave with the effects of that destruction. That is probably what has caused most of the problems in the world today.

“This is not issue of weakness. We will explore every avenue for negotiation. The military strength of this country is not in doubt. I think if anybody doubted it, you will see what has happened to Boko Haram.

“But we will first discuss. We will first negotiate but if doesn’t work we will not know what to do. But I have not seen evidence that the avenues for negotiations have closed. We are making a dramatic progress and I will like to push those frontiers.”

Akwa ibom state Governor Udom Emmanuel also advised the Federal Government to dialogue with the avengers to allow for sustainable peace and development in the region.

Emmanuel noted that the country’s economy had been brutalised by the recent violence being experienced in the Niger Delta region.

“Government must do all it can to dialogue with Niger Delta militants as our economy is based on resources accruing from this region.

“Government must look into the underlining issues of the region; we must dialogue with the stakeholders from the region to resolve these problems once and for all.”

Emmanuel also urged the Federal Government to revive the amnesty programme with a view to accommodating more persons.

He said that abandoning the programme will not the best option now for the people.

On the discrepancy in the allocation of oil blocks raised by some indigenes of the Niger Delta, Kachikwu said President Muhammadu Buhari had not allocated any oil blocks since he came on board.

He, however, assured the Niger Delta people that at the appropriate time, due process would be followed in the allocation of oil blocs so that it would be beneficial to the people of South South region.

Kachikwu said: “Since we came on board, this government has not allocated any block of petroleum. The President has not put any emphasis on that at all. He said he needs to correct the mess before we begin to think of giving advantages.

“On the issue of oil blocks, when the time comes it will follow due process. I am one of those who believe that there is a need for us to see how the South South corridors will benefit from the oil blocks because that is part of giving back. It will bring the final solution to this area. Those who have skills and finances to develop will be allowed to develop it.”