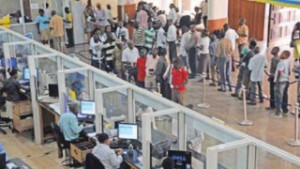 We reported earlier on “a proposal to limit the over the counter cash withdrawal by bank customers to N10,000 which has been tabled before the Central Bank of Nigeria (CBN). The Sub-committee on Payments Systems and Infrastructure of the Bankers Committee last week sent the proposal to the CBN. The proposal was presented at the committee’s meeting but it is not clear whether it was considered. The CBN is expected to “give feedback on the request”.

The banks by the proposal want to further compel bank customers to use e-banking channels, e.g. ATMs, internet banking etc. However when there is a dispute involving transactions on any of those channels it takes a long time before they are resolved and customers often go through harrowing experiences before a resolution is reached. For instance in cases of ATM dispense errors (i.e. ATM fails to dispense cash but customer account is debited) involving the ATMs of two different banks, it takes sometimes over a month before there is a reversal of the debit and in some instances there is no reversal at all and the banks will go to court insisting that there was a withdrawal without providing conclusive evidence of such withdrawals like ATM camera footages as required by CBN guidelines. See for e.g. the cases of KUME BRIDGET ASHIEMAR vs. GUARANTYTRUST BANK PLC (GTB) & UNITED BANK FOR AFRICA (UBA) PLC, Suit No: MHC/198/14 and  BARR. TIMOTHY TION vs.FCMB LTD & UBA PLC. (Suit No. MHC/161/16), pending before the Benue State High Court of Justice, Makurdi.

Further evidence of how it takes long for ebanking disputes between banks and customers to be resolved can be found in my own case where I sent an email to the Central Bank of Nigeria’s (CBN’s) Consumer Protection Department (cpd@cbn.gov.ng) over a disputed ATM withdrawal since December, 2015 and I did not get any response whatsoever from the Consumer Protection Department till date.

It is even doubtful if there are enough ATMs to service customers who will have to resort to ATM withdrawals if across the counter cash withdrawal is limited to N10,000.

Previous Chief Change Agent,Buhari Changes Return Date From London To Sunday
Next CBN Says naira will settle at 250 per dollar