Ojudu Says Buhari Or Tinubu Not Using Me Against Saraki 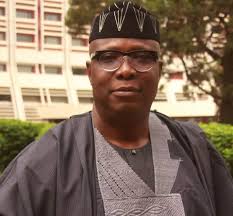 The Special Adviser to the President on Political Matters, Senator Babafemi Ojudu, has said his role as a witness in the case of forgery of the Senate Rules applied in the election of the President and Deputy Senate President of the Senate, Dr. Abubakar Bukola Saraki and Ike Ekweremadu, on the floor of the Red Chamber on June 9, 2015 has to do with his membership of the 7th Senate and as one of the conveners of the Unity Forum that called the police attention to the forgery.
The Attorney General of the Federation and Minister of Justice, Abubakar Malami, on Monday dragged Saraki and Ekweremadu to court for alleged forgery and conspiracy.
The case is being heard by an Abuja Federal High Court.
Also dragged before the court along with Saraki and Ekweremadu are the immediate past Clerk of the National Assembly, Alhaji Salisu Maikasuwa, and the Deputy Clerk of the National Assembly, Benard Efeturi.
Senator Ojudu is one of the over 15 witnesses in the case.
Ojudu said his involvement in the case has nothing to do with his current position as the Special Adviser to the President, but as a member of the Unity Forum.
He said in a statement on Tuesday: “My statement and other witnesses statement were taken months before my appointment. As a member of the Unity Forum, I am one of those who worked for Senator Ahmed Lawan as the preferred candidate for the Senate Presidency in the June 9 2015 election.
“There are three groups of senators, they are: the Unity Forum, Like Minds and the non-aligned. The Unity Forum comprises both serving and non-serving senator. I am an active member, being a senator in the 7th Senate from 2011 to 2015.”
Ojudu said while he was at the Senate for four years, at no time were the rules amended, adding: “So tampering with the rules by the current senate was seen as a misnomer by us and that was why we petitioned the police.
“The statement we did to the police on the matter predated my appointment and that of Senator Ita Enang. It will therefore be preposterous for anyone to classify me as representing the Presidency on the matter.”