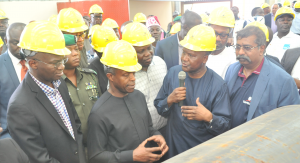 The Refinery and Fertilizer projects of Dangote Industries Limited is expected to create a minimum of both direct and indirect job of 235,000 new jobs, as it becomes operational in the first quarter of 2019. President of Dangote Group, Aliko Dangote who revealed this also stated that the projects will cost a minimum of $17bn.

Vice-President Yemi Osinbajo however assured the Management of Dangote Industries Limited (DIL), of the support of the Federal Government towards the completion of both its Refinery and Fertilizer Companies that are expected to create a minimum of 235,000 jobs. The Projects, which are set to take off in the first quarter of 2019.

Osinbajo after the inspection of the Refinery and Fertilizer last weekend said: “… supporting what you are doing here is not a favour. It is not a favour that would be done to Dangote group, but is an important part of our own up building of the Nigerian economy. As a matter of fact, it is a crucial part of building the Nigerian economy… when people say that somebody is building something, they are doing a refinery at Lekki, your concept of that, the way you visualize that, is a structure somewhere. May be a couple of warehouses or two. That’s how you visualize it. And certainly you don’t think they deserve all the noise and attention and certainly not the money they might have access to. But when you come to a place like this, you fully understand, that this is not just only about building a refinery, it is about building an industrial hub, a modern industrial hub. That is an enormous undertaking. It’s a great thing that is being done here. And frankly, I think that we ought to give this place far more attention both as federal government and state government.”

He assured that the Federal Government will do all within its powers to assist and encourage Dangote to realize his dream of building the biggest refinery and fertilizer companies in the World.

“I am really excited and have been thoroughly educated today. I have always been interested in what the Dangote Group has been doing but I must say that I am much more committed to be a supporter of what you are doing here, and to see to it that in whatever way, shape or form we are able to contribute to this. I was telling the President yesterday afternoon that we would be coming here today, he said “yes, yes, yes, we need to encourage him. We need to encourage him.” I am sure he also felt like look, there’s a need to do something.”

Earlier, President of Dangote Group, Aliko Dangote told the Vice-President that the $12 billion refinery would have a capacity of 650,000 barrels a day. He assured that there will be market for the refined products because even in Africa, only three countries have effective functioning refinery with others importing from abroad.

Dangote named the countries with refinery as Egypt, South Africa and Cote ‘de voire saying our refinery be ready in the first quarter of 2019. Mechanical completion will be end of 2018 but we will start producing in 2019.”

When the projects fully take off in 2019, Dangote said it will effects help the country save $5 billion spent on the importation of oil into the country.

He explained that the project with the  $2 billion fertilizer unit  was the funded through loans, export credit agencies and our own equity.

The Vice-President further assured that the federal government would harness the potentials of the private sector to make the nation economy recover speedily.

Dangote explained that the diversification of Nigeria economy was long over-due and that one sector that Nigeria can focuses on  to rejuvenate the economy is agriculture.

He stated that his investment in fertilizer is one sure way the diversification into agriculture could succeed because according to him, it will amount to little if focus is directed to agriculture and fertilizers would be imported.

Said he: Agriculture is the way to go, but a critical component of that sector is fertilizers, Nigeria has more arable land than China which now is the biggest economy in the world, we can tap into our vast land and produce what we need and even export  the remaining.
“By the time we complete this project, there will be opportunity to take on agriculture and say bye to poverty, because there will be jobs, no sector has more job potential than agriculture”

Dangote said the project was an ambitious one and that when completed it will give Nigeria a new economic direction in the quest for diversification of the economy, as excess products would be imported to give Nigeria the much needed foreign exchange. That is when diversification starts.

Previous Noise pollution: Lagos shuts down 70 churches, 20 mosques, others
Next 21Seniors Hacked Down (Retired) For New Police IG To Emerge