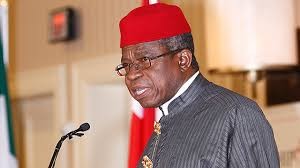 A former Minister, diplomat and politician, Chief Ojo Maduekwe is dead. He was 71.

Chie Maduekwe,a former National Secretary of the Peoples Democratic Party (PDP), who served in all the PDP governments between 1999 and 2015, died yesterday in Abuja. He slumped inside a vehicle on his way from the Nnamdi Azikiwe International Airport.

A source, who relived his last moment said: “The ex-minister was at the airport to receive one of his children who graduated with honours abroad.

“After welcoming his child at the airport, they headed for Abuja city but on the way, he suddenly developed health complications.

“He was rushed to a private hospital in Asokoro District. He nevermade it as he was pronounced dead at the hospital. .

“He was a proud and devoted father till he had his last breath. And he demonstrated his commitment to family life by going to the airport to receive one of his children.”

Chairman of the Board of Trustees (BoT) of the PDP Senator Walid Jibrin lamented Maduakwe’s death when he spoke with reporters on the telephone from Saudi Arabia where he is performing the lesser Hajj.

Maduekwe’s last job was as Secretary of the BoT.

Secretary of ex-PDP Ministers Forum, Prof. Abubakar Olanrewaju Suleiman, said last night: “It is sad that we lost one of our finest men at a crucial time. I am shocked beyond words.

“He was one of the few conscientious leaders we had left because you cannot buy him with money. This was why we made him the Secretary of the BOT.

“And until he died, he was committed to the reunification and rebuilding of PDP. We will miss his rare wisdom, integrity, and courage to speak truth to power.”

Former Anambra State Governor Peter Obi described Maduekwe as an unusual politician, who was not afraid of his own voice, especially in speaking out on matters bordering on the way forward for the country.” If he was brutal at certain points, it was just an insight into the depth of his passion,” he said.

Maduekwe who was born in Mbaisie, Abia State on May 6, 1945, was appointed culture and tourism minister by former President Olusegun Obasanjo in1999 and Minister of Transportation in 2001. In this position, he advocated greater use of bicycles, although critics said the roads were unsafe for cyclists and Maduekwe himself was pushed into a ditch by a bus while cycling to work.

In 2007, the late President Umaru Musa Yar’Adua appointed him Foreign minister. He held this office till 2010 when acting President Goodluck Jonathan dissolved the cabinet.

In 2011, he worked as the deputy director of PDP presidential campaign 2011 Goodluck/Sambo ticket. He was appointed as High Commissioner to Canada.