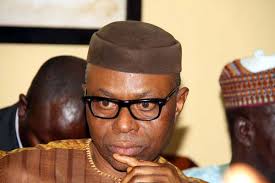 Special Assistant to Ondo State Governor, Dr. Olusegun Mimiko on Political Mobilization, Hon. Mosunmola Awotula, popularly called iron lady has led hundreds of members of the Peoples Democratic Party (PDP) into the All Progressive Congress (APC) in Irele local Government.
While speaking on behalf of the Decampees, Hon. Mosunmola said the PDP is a party of broken promises, which has inflicted pains on the people of the state.
She noted that Governor Mimiko has played his last card and can no longer deceive and cajole the people of the state into voting for the PDP.
“We are the strong leaders of the PDP in Irele, I have been a woman leader in ward 2, after that I became organising secretary before Mimiko came to PDP.
“When Mimiko defect to PDP, he rendered us, the executive members useless and refused to carry us along in the scheme of things,  that shows that Mimiko is a selfish leader,” she said.
Also explaining why they left PDP, one of the leaders, Hon. Ikuemelo described the PDP is a dilapidated building, saying they left the party before it will collapse on them.
He said the PDP in the state will soon become a dead party with no strength within the sunshine state.
The community Chief Said with their exit, there is no PDP in Irele local Government anymore.
He assured that the APC will become Victorious in the coming November 26 governorship election.
Engineer Ade Adetimehin assured the defectors of equal treatment, saying no founder, no joiner.
He enjoined them to preach the gospel of APC and mobilize others into the party.
The APC chieftain said the defector must work together with leaders of the party in the area to ensure that APC win the community in the coming election.
Among the decampees were Ayaki of Irele land, Chief Olorunda Ikuemelo, PDP Vice Chairman in ward Four, Dayo Olajide, Comrade Ademuwagun Fakomogbo, Comrade Soji Olowotimehin and Madam Aderotoye Abike.
Others included Akinbamiro Ojuetimi, Olayinka Moyo and Comrade Adebayo Adegoroye.

They were received into the APC by the deputy chairman of the party in the state, Engineer Ade Adetimehin.