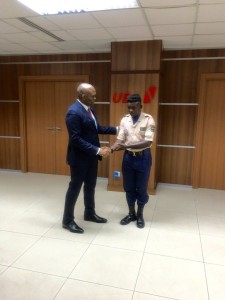 Banker and entrepreneur, Tony Elumelu has shared the story of Mohammed Ogbanago,  a security guard at his United Bank for Africa Group who found and return the sum of $10,000 (over N3 million) belonging to a customer on the ground in the Oba Akran branch of the bank and returned the money instead of pocketing it.

For his honest deed, Ogbanago has the privilege of shaking hands with Elumelu who is the chairman of UBA Group and also meet with the Board of the Bank.

The honesty of the security guard can be appreciated when it is realised that he, like most of his other counterparts,  is on a wage of less than $200 a month.

“Last month, Mohammed Ibrahim Ogbanago, a security guard at the @ubagroup branch in Oba Akran, found $10,000 belonging to a customer outside on the ground at his branch. In an unparalleled display of his own integrity, he decided to return the money, preserving the integrity of the bank.

“When I heard about this story, I knew I had to meet the man who despite facing rising petrol & transportation prices and “tomato ebola” returned such a huge sum of money without recourse to himself.

“It was a pleasant surprise to hear him tell this story and about how he came to be in the board room with us. Even more surprising was hearing him speak about his passion for governance and integrity in leadership.

“Mohammed Ibrahim Ogbanago is an exemplary ambassador of the UBA spirit and of our core values: “HEIR” Humility, Empathy, Integrity & Resilience. At @UBAGROUP the customer comes first and we uphold their trust in us. It was fulfilling to meet and reward him for his conduct.

A security guard with the United Bank for Africa, Mohammed Ogbanago, who returned $10,000 (about N2.8m) misplaced by a customer, has said he was ridiculed for the action.
He explained that he returned the money to show that all Nigerians were not corrupt and to set a good example for Nigerian youths.

The money was said to have fallen from an $84,500 withdrawn by a bank customer.

The security guard was said to have taken the money to the bank’s operation manager, who then handed it over to the customer when he revisited the bank.

He was reportedly applauded by the bank’s leadership for the action, which it said was exemplary.

The bank repeatedly promised to give him a letter of commendation for the ‘unusual’ conduct.

Elumelu, who posted his meeting with Ogbanago on his official Instagram page, said, “When I heard about this story, I knew I had to meet the man, who despite facing rising petrol and transportation prices and ‘tomato Ebola,’ returned such a huge sum of money.”

During a chat, the guard, who graduated from the Kogi State College of Education in 2012, said good upbringing helped him to resist any temptation to abscond with the money.

He added that the story of an airport cleaner (Josephine Agwu), who returned the N12m she found at her work place, also inspired him.

He said he had boasted to his friends that he would do better if he had the chance.

He said, “And my chance came on that day. I was coming from inside the bank when I saw the money on the ground and I decided that the best thing was for me to take it to the operation manager. The owner of the money later came to ask for it.

“After I did that, some people started ridiculing me that I shouldn’t have returned the money and that I should have considered my meagre salary before letting go of such a huge sum of money. But I felt I did the right thing. If I had, for instance, taken the money away and fled to my village, it would not be a case of misplaced money again, but stealing, and I could even be declared wanted.”

Ogbanago, who said he aspired to public leadership, said his action was to show that not all Nigerians were corrupt.

“Although my salary may not be enough for my upkeep, especially with the current economic situation in the country, it is no excuse to take what is not mine.

“I have been campaigning that to make Nigeria great, we all must prove to be good Nigerians in our small corners. Not all Nigerians are corrupt.

“I am happy I had the chance to prove myself and I want other Nigerian youths to learn from it. I want our youths to know that a good name is better than riches,” he added.