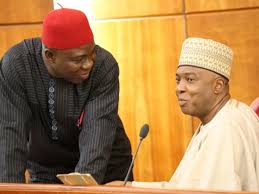 A Federal Capital Territory High Court sitting in Jabi has adjourned trial in the forgery case against the President of the Senate, Dr. Abubakar Bukola Saraki; his Deputy, Ike Ekweremadu; and six others to September 28, 2016.
The adjournment was announced on Monday morning.
Saraki, Ekweremadu and others are being tried for allegedly forging the Senate Rules that was used for the election that produced them as Principal Officers of the Senate.

Saraki, Ekweremadu, and two co-accused – a former Clerk to the National Assembly, Salisu Maikasu, and his then deputy, Benedict Efeturi – were in court briefly and left as soon as they were informed that the court was not going to sit.

Meanwhile,  a four-man team led by a former Attorney-General and Commissioner of Justice of Kano State, Aliyu Umar (SAN), took over the prosecution of the case from the Director Public Prosecutions of the Federation, Mr. Mohammed Diri, today.

Diri was not present in court today but th‎e Umar-led team was around to take the new date for commencement of trial.

The trial was adjourned till September 28.

Other members of the new prosecuting team are a Lagos-based public interest litigation lawyer, Jiti Ogunye; Raphael Origo, and a state counsel from the Federal Ministry of Justice, Yetunde Adeola-Cole.

The Federal Government through the office of the Attorney-General of the Federation had on June 10 preferred the charges against Saraki and the other accused persons.

The accused persons were subsequently on June 27 arraigned on two counts of criminal conspiracy and forgery before Justice Yusuf Halilu of a Federal Capital Territory High Court in Jabi, Abuja.

The court had after the accused persons pleaded not guilty to the charges on June 27, fixed today for commencement of trial.