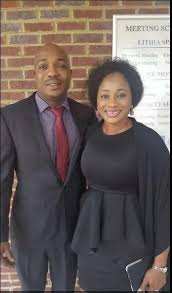 Nollywood actress, Clarion Chukwurah ,51, is now associating with Jehovah’s Witnesses  in Georgia ,USA, where she now resides with her husband…To Clarion the development is a new and wonderful development.the injuctions , admonitions and Bible lessons are precious in her eyes.

On the encounter with her husband ‘s faith, She wrote, “An Instructive Meeting Sunday at the Kingdom Hall towards Baptism and Evangelization Ministry as Jehovah’s Witnesses”. She also shared a photograph with her husband a Kingdom hall of Jehovah’s witnesses in Gerogia.

Clara Nneka Oluwatoyin Folashade Chukwurah, had had close contact with the religion in Nigeria via constant reading of interesting materials in Awake! magazines ,but to her the close contact is an eye opener.

Chukwurah had been married twice before, to Tunde Abiola (MKO Abiola’s younger brother) and Femi Odeneye and she had Clarence for juju musician Sir Shina Peters.She once had a relationship with afro-juju legend, Sir Shina Peters and bore a son, Clarence Peters after she ended her first marriage to a certain Mr. Abiola in 2003.

She then remarried in 2004 to Femi Oduneye popularly known as Femi Egyptian; they however, separated in 2006, after which they got back together about six years ago before they finally got divorced recently.

She eventually tried her hands in marriage again with Anthony Boyd I 2014.

Previous Tnubu Vows To Deal with Dino Melaye if he beats Sen. Remi
Next GTBank gets double honours at Euromoney Awards