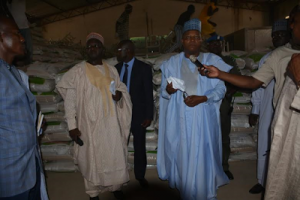 The Chairman of Dangote Foundation Alhaji Aliko Dangote has promised to partner with Yobe State Government to rebuild all the Health facilities that were destroyed by Boko Haram insurgents in Yobe State,particularly, the ones destroyed in the two local Governments of Gujba and Gulani Local Government.

Gujba and Gulani were the two local governments taken over by Boko Haram at the heat of the insurgency before they were liberated by the military.

” I want to praised the effort of Yobe State governments for doing a fantastic job in making sure children are immunized in the state despite the security challenges. On the destroyed health facilities in the two local governments by Boko Haram, Dangote Foundation will partner with Yobe State to ensure that they are re-constructed. Dangote foundation may end up constructing all of them but I think we should have a partnership to ensure these facilities come back to functionality so that our children will with immediate effect begin to access the healthcare services,”‘Dangote said.On his side, the Co-chair of Bill & Malinda Foundation, Mr. Bill Gates who also joined the event from Seattle, USA equally commended the State government for the stride made so far.

Mr. Gates noted with delight, the effective engagement and involvement of traditionally rulers in the campaign and other stakeholders by Yobe State Government, while calling on the speedy award of contracts enshrined in the MoU.

The Director National Primary Healthcare Agency, Dr. Ado Mohammed on behalf of The Federal Government donated the sum of $1.5 dollars to Yobe State Government as support to their commitment to the immunization drive in the state.

Yobe State Commissioner for Health Dr. Bello Kawuwa while presenting the report explained that 15 out of the 17 local government areas in the state were significantly covered except the remaining two-Gulani and Gujba which were occupied by Boko Haram insurgents before liberated by the military.

According to him, the good news is that the two local Governments are now accessible but the bad news is the destruction of nearly all the health facilities in the two localities.

Yobe State governor Ibrahim Gaidam in his comments told the partners that his administration is very committed to the MoU to ensure the total eradication of all the nine killer children’s diseases in the state.

He thank Dangote for offering to assist the state governments in the reconstruction of the destroyed health infrastructure in Gujba and Gulani, while also commending Mr. Gates and other partners for their unflinching commitment and support to children’s health across the world and Yobe particularly.

The Director Yobe State Primary Healthcare Agency, Dr. Hauwa Goni Fika explained that the whole idea of the MoU was to bridge the gaps in immunization coverage in the state which according to her include, security challenges, inaccessibility of some areas in the state, destruction of health facilities in the state, lack of cold storage facilities in some communities which makes it difficult of the movement of vaccines.