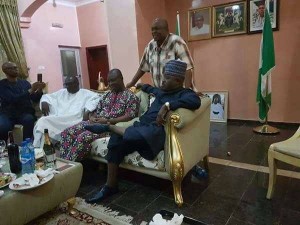 Leaders of the Peoples Democratic Party (PDP) met on Thursday in Abuja and came out with a resolution: No more war.
At the Expanded Caucus Meeting held at the Yar’Adua Centre, hitherto sworn enemies shook hands and vowed that such a factional crisis will not rear its head again in the party.
The meeting was chaired by Senator Ahmed Makarfi.
Other members of his National Caretaker Committee were also in attendance.
Also present were former National Chairman, Dr. Ahmadu Ali, former Deputy National Chairman of the party, Chief Olabode George, governors, senators, members of the House of Representatives, Prof. Jerry Gana, Dr. Walid Jibrin, Senator Ibrahim Mantu, Senator Ben Obi and other leaders across the country.
At the end of the meeting, it was resolved that the party’s National Convention will hold on August 17 in Port Harcourt, Rivers State.
The position of the national chairman was zoned to the South while the presidency for the 2019 election was zoned to the North.
A Committee was also constituted to work out the new zoning arrangement.
A National Reconciliation Committee, headed by Deputy Senate President, Ike Ekweremadu, was also constituted to continue with reconciliation efforts of elders of the party.
Before the Yar’Adua Centre meeting, another meeting had held at the Taraba State Governor’s Lodge in Abuja where Senator Ali Modu Sheriff recognised Makarfi as the chairman of the party.