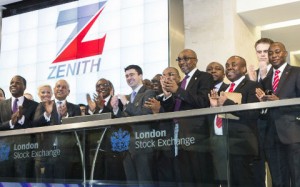 Zenith Bank Plc has been rated Nigeria’s most customer-focused bank by the leading Advisory and Consultancy firm, KPMG.

In the 2016 edition of the annual banking industry Customer Satisfaction Survey recently released, Zenith topped other Nigerian banks in the Customer Satisfaction Index (CSI) with a total of 74.6 points to clinch the prime position in the retail banking category; thereby re-enacting the feat it achieved in 2013 and 2014. Guaranty Trust Bank came second with 74.1 points closely followed by Diamond Bank and Stanbic IBTC with 73.5 and 73.1 points respectively.

The survey, launched in 2007, draws responses from customers across the retail, SME and corporate banking segments on customer preferences, levels of satisfaction and expectations from their banks.

Zenith Bank has featured prominently in the survey since it was launched 10 years ago, according to organisers; “to heighten consciousness of service delivery among Nigerian Banks”.

The Customer Satisfaction Index (CSI) measures customer satisfaction with banks, and are ranked based on the perceived level of satisfaction derived by customers surveyed from the different categories.