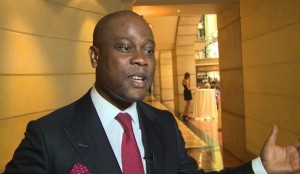 The GMD/CEO of Access Bank Plc, Herbert Wigwe has said that the Bank would sustain its support to the vulnerable children, orphans and internationally displaced persons in the northern part of Nigeria through its collaboration with UNICEF.
Wigwe made the declaration at the 2016 Access Bank Polo Day, in association with Fifth Chukker, at the Guards Polo Club, Windsor, UK last Saturday.

The annual event is the climax to the high-profile Access Bank/UNICEF Charity Shield Polo tournament, which is in its ninth year and is aimed at reaching out to and highlighting the plight of vulnerable children and orphans and internationally displaced persons.

Based in Kaduna, Nigeria, it is the biggest charity polo tournament in Africa and stimulates support for the work of the UNICEF/ACCESS Bank initiative across Africa. This year, the Bank donated an additional N10 million to UNICEF for its campaign against HIV/AIDS among Nigerian children.

“We are conscious of our role as a change agent in Nigeria that can help institute socio-economic development through responsible business practice and environmental considerations,” he said.

“In addition, we are continually seeking ways through which more resources can be pooled towards supporting the children. We are part of the community and as such should support its well-being.”

He stressed that funds raised from the event would be used to support the IDP camps across the northern part of Nigeria and help uplift their standards.

“We try to support the communities in which we do business in order to help them achieve their potentials. Under the programme of the Central Bank of Nigeria (CBN), we are the first Bank to adopt the sustainable banking principle, we are working to eradicate malaria. It shows that we can still be profitable while carrying out the sustainability projects that we undertake.”

Since the UNICEF/ACCESS Bank initiative was started it has rebuilt two schools in Kaduna and, kept more than 8000 students in continuous education, while at the same time developing new school blocks and a computer literacy building all in a more secure and friendly school environment.

The communities surrounding the schools are being supported with bore-holes for water, and sewing and grinding machines to secure employment and stimulate economic and social development.