Eunice Elisha, the female preacher who was murdered in Abuja on July 9 while evangelising around Gbazango-West area of Kub 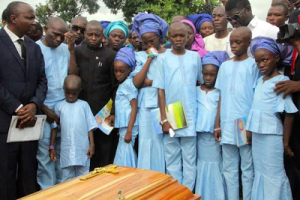 wa, has been laid to rest.Husband and children of Abuja based RCCG evangelist, Eunice Olawale, wept profusely as she was laid to rest in Abuja

The unknown assailants of the 42-year-old mother of seven, who was a deaconess at the Divine Touch Parish of the Redeemed Christian Church of God, Kubwa, stabbed her in the stomach and also slit her neck.

They then left her in the pool of her blood, with her bible, megaphone and cellphone — until her corpse was spotted by residents of the neighbourhood, who alerted the police.

Olawale Elisha, her husband, also a pastor at RCCG, had said his wife left the house at about 5am to preach in the nieghbourhood.

He also said he had forgiven his wife’s killers.

The burial service and rites, which held on Saturday, were attended by Femi Adesina, special adviser to the president on media and publicity, and Babachir Lawal, secretary to the government of the federation.

Previous The Fall & Fall Of Nigeria Football From world’s no. 5 to 70
Next UBA boss says infrastructure challenges hinder African economies