The Fall & Fall Of Nigeria Football From world’s no. 5 to 70 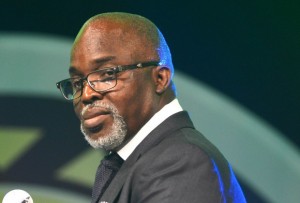 AFTER being ranked number five — Africa’s best position ever — in the world in 1994 by FIFA, a reversal of fortunes 22 years later, has seen Nigerian football slide to a catastrophic 70th position in the latest FIFA rankings, the worst placing ever by the country.

The present board of the Nigeria Football Federation, led by its president, Amaju Pinnick, was elected into office in September 2014 and ever since, the game has steadily declined due to gross incompetence and display of inability to run football affairs by his board.

When they were elected two years ago, Nigeria was ranked 37 in the world, just few months after a Round of 16 finish by the Super Eagles at the 2014 World Cup in Brazil.

But ever since, the Eagles, who have failed to qualify for two Africa Cup of Nations (2015 and 2017), are ranked 70th on the FIFA log, amidst fears that the national team might not qualify for the 2018 World Cup due to the crisis rocking the football sector in the country.

The fall of the Eagles and the general decay in Nigerian football has been adduced to several blunders committed by the football body.

On assumption of office, the Pinnick led-board of the federation, rather than douse the power struggle between then coach, late Stephen Keshi, and the federation, ignited it. Keshi had been locked in a battle with Pinnick’s predecessor Aminu Maigari led-board, leading to the coach’s resignation after winning the 2013 AFCON.

But an intervention by the Presidency brought back Keshi to his post and it didn’t go down well with some members of the board, who were also in the previous board, and were bent on seeing Keshi dismissed.

The crisis deepened, played a role in the Eagles’ inability to defend their 2013 AFCON title before Keshi was eventually sacked in July 2015.

After the Eagles failed to qualify for a second consecutive AFCON in March, using three local coaches in the process, he told journalists in Lagos, “If there is a local coach I will bring back to the Eagles, it has to be Keshi.”

In a hasty move to replace Keshi, Pinnick brought in the inexperienced and unpredictable Sunday Oliseh as new coach of the national team. Amidst criticisms, the Delta-born administrator insisted he was handing Nigeria ‘Africa’s Guardiola.’

“Let me tell you that we are just presenting to you the Pep Guardiola of Africa, we are very excited because we know as a federation, that Sunday Oliseh will deliver,” Pinnick stated during Oliseh’s unveiling in Abuja.

Oliseh then embarked on a stormy seven-month coaching journey that saw him falling out with his key players, the media and the federation.

Not too long, he was engulfed in a tussle with the NFF over the selection of players and payment of salaries and allowances. And the board members were irked when he declared publicly that he was owed salaries by the federation.

A disgraceful outing at the 2016 CHAN tournament, where the home-based Eagles were eliminated in the first round, saw Oliseh and his employers at daggers drawn.

The former Nigeria captain then resigned in February — less than a month to the crucial 2017 AFCON qualifying double-header against Egypt — citing contract violations, lack of support, unpaid wages and benefits to his players, assistant coaches and himself, for his decision.

In the middle of the crisis, the federation brought on U-23 national team coach, Samson Siasia, to manage the Eagles for the encounters against the Egyptians, but it was too little too late. Egypt held the Eagles to a 1-1 draw in Kaduna, before beating the three-time African champions 1-0 in Alexandria to book a ticket to next year’s AFCON.

The contract between the country’s football body and kits manufacturing company, Nike, signed last year, has been marred by a shortage of kits, with some describing it as a ‘slave contract.’

Since the deal was sealed by both parties, the national teams — male and female — have witnessed a shortage of training and match kits.

At last year’s All Africa Games, players of the U-23 team had just one jersey, which they had to wash themselves after each game. “It’s embarrassing; we don’t have training kits up till now. We wash and wear. People see the finished product but they don’t see what we go through,” U-23 team coach Samson Siasia said.

Even the triumphant 2015 U-17 world champions, the Golden Eaglets and the 2016 CHAN Eagles suffered same.At the Africa U-23 Cup of Nations in Senegal late last year, Nike omitted NFF’s official logo from jerseys of the U-23 team.

Last year, NFF’s Director of Marketing, Idris Adama, reportedly expressed dissatisfaction with the contract signed, calling it a “slave deal.” He alleged that the $2.75m value placed on the three-and-a-half-year contract only covered cost of kits to be supplied to the federation within the time period.

According to Adama, with no retainers fees attached to the contract, the various national teams will merely serve as an advertising channel for Nike products, in sharp contrast to the previous deal with Adidas, which saw the German company pay a $750,000 retainer.

Sports Minister, Solomon Dalung, hinted that he would investigate the contract between the NFF and Nike.

A close aide of Dalung told our correspondent in February, “At the 2016 African Nations Championship, their kits looked like they had been washed a million times; the collars were sagged. Don’t be surprised the minister will go to Nike very soon and ask them to give him the details of the contract between them and the NFF.”

The NFF it was learnt, would earn $3.75m during the three-and-a-half-year partnership and $500,000 in bonuses if the Eagles qualify for the 2018 World Cup among several other add-ons.

The NFF would receive $750,000 in the first year, which would rise to $1m each year in the three-year-contract.

From the previous contract with Adidas, the NFF got N150m per year.

Despite the Nike deal, the NFF has claimed to be perennially broke since Pinnick assumed office two year ago.

In fact, the federation owes virtually all the coaches that have worked under it wages and bonuses. Players’ allowances are equally not paid as at when due.

The federation also reportedly decided that developmental teams from U-17 downwards would no longer be entitled to match bonuses, while assistant coaches of the national teams are now engaged on part-time basis to ease the financial burden on the football governing body.

“The harsh economic crunch has affected our spending, which is not limited to us only; it happens across board; we are almost left with nothing in our purse,” Pinnick told the News Agency of Nigeria.

Stakeholders in the football industry are astounded by how difficult the NFF had made the job of hiring a coach for the Eagles look after the controversy that trailed the federation’s bod to contract Frenchman Paul Le Guen.

A statement on the NFF website and Twitter handle on Monday said the former Paris Saint-Germain manager had been appointed as Nigeria’s technical adviser alongside Salisu Yusuf, who would be the team’s chief coach.

However, Le Guen rejected the appointment the following day, which drew widespread criticisms of the NFF.

In a face-saving move, the federation stated that it only recommended Le Guen and never stated that it had hired the Frenchman. But the damage had been done and Nigeria stay in search of a coach with just three months to their crucial World Cup qualifier against Zambia.

But the last on the Le Guen story may not have been heard as a report on Africanfootball.com website said NFF board members threatened to impeach Pinnickat Wednesday’s executive meeting in the wake of the scandalous handling of the botched appointment of the French coach.

Keen followers are still watching with anxiety, who will host FIFA boss Gianni Infantino when he visits Nigeria on Sunday.

There has been a battle between Pinnick and Chris Giwa over the soul of Nigerian football, with the latter laying claim to the presidency of the body.

Giwa was elected NFF president on August 26, 2014 in an election that was reportedly marred by electoral malpractices. Only 29 of 44 members allegedly voted as he defeated former NFF vice president Mike Umeh.

But another election in Warri a month later brought in Pinnick as president, a choice supported by former FIFA president Sepp Blatter and ever since, Nigerian football has never known peace, with both men at each other’s jugular.

Pinnick’s critics believe he has failed in handling the matter rightly, saying he has allowed the tussle affect his management of Nigerian football negatively.

“Amaju’s scorecard is there for everyone to see. Under him we didn’t qualify for two AFCON events; it never happened before. We won the U-17 World Cup and we will continue to win it because we have our way of doing things but success at that level will never translate to the senior team if we don’t change,” the ex-Sunshine Stars goalkeepers trainer said.

“What we are seeing is a collapse of the system and it’s not s surprise. Foreign coaches are afraid to come to Nigeria because this NFF has made the coaching job unattractive. They read news about NFF not paying their coaches; do you think they will come?

“We lost out of two AFCONs and we are taking the 2018 World Cup as a joke. We will not qualify if we keep on this way.”

“I have made several enemies because I insist that the major problem of our football is administration and not technical,”Onigbinde said.

Tags slideshow The Fall & Fall Of Nigeria Football From world’s no. 5 to 70