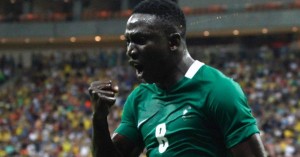 Nigeria’s men’s football team, had a disastrous start when they were left stranded in Atlanta, fortunately it got resolved. They get to Olympics and while on the field for their match against Japan, the wrong National anthem was played.

The Nigerian U-23 team did a great job beating Japan 5 goals to 4 in Manaus on Thursday just hours after landing in Brazil for the Rio 2016 Olympics. Oghenekaro Etebo became the first Nigerian to score a hat-trick at the Olympics.
There were 8 goals scored in 77 minutes.

Sadiq Umar got the goal fest underway, putting Nigeria ahead barely five minutes in. Three minutes later Japan was awarded a penalty, which Shinzo Koroki converted from the spot to level the score at 1-1. 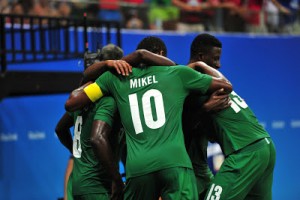 Japan had barely finished celebrating when Nigeria regained the lead through Oghenekaro Etebo.

After the first 15 minutes there came a period of relative calm until Etebo struck again three minutes before halftime, taking the jet-lagged Super Eagles into the break with a one goal lead.

Nigeria extended the lead five minutes into the second half after Umar went down in the box and won a penalty. Etebo completed his hat-trick from the penalty spot to make it 4-2, Nigeria.

Nigeria scored again in the 66th after Japanese goalkeeper Masatoshi Kushibiki rushed out to shut down an attack, leaving his net unattended for a charging Etebo who promptly made it 5-2 in the 66th minute.

Etebo, who plays his club soccer in Portugal, had a particularly good night, putting five shots on goal, scoring four, and becoming the first Nigerian to score a hat-trick at the Olympics.

In tthe 70th minute substitute Takuma Asano who side-heeled in a cross from Hiroki Fujihara from close range made it 5-3.

Moments later Asano, who was recently signed by Premier League giants Arsenal, rocketed an effort off the post although the whistle had blown for offside.

Japan scored again in extra time through substitute Musashi Suzuki who pulled the ball back away from the defense and slotted it to the far post past Nigeria keeper Emmanuel Daniel, settling the score at 5-4 in Nigeria’s favor.

By that time it was midnight local time and the exhausted Nigerians had just claimed victory in what has far and away been the most entertaining match we’ve seen yet in the Rio Olympics. Not bad for a team that had started traveling at 7 a.m.

Previous NGE president urges Nigerians to enliven entrepreneurial spirit
Next Minister hails Editors, urges them to be Champions of Change