Confusion as Obasanjo is sighted at PDP event venue 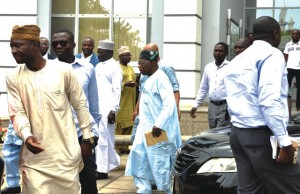 There was a mild drama on Friday at the Shehu Yar’Adua Centre, Abuja, the venue of the inauguration of the Peoples Democratic Party national convention committee, as former President Olusegun Obasanjo was sighted on the premises.

The former President was at centre to attend a programme on Agriculture while the PDP leaders were also at the same premises to attend their party’s event.

Obasanjo had on February 16, 2015, torn his PDP membership card, saying he was leaving the party for good.

Interestingly, leaders of the PDP rushed to pay homage to the former President when he was sighted at the venue.

The PDP convention holds in Port Harcourt on August 17.

Our correspondent gathered that one of the administrators of the building had alerted the PDP leaders of the presence of Obasanjo in the building.

It was gathered that as soon as the party leaders were informed about Obasanjo’s presence, they rushed out to greet him.

Among those that were said to have rushed out to pay homage to the leader of the party included its National Chairman in charge of the National Caretaker Committee, Sen. Ahmed Makarfi; the Secretary of the committee, Sen. Ben Obi and a former Deputy President of the Senate, Ibrahim Mantu.

The former President greeted them briefly and proceeded to attend the programme he had come for.

Leaders of the party had been visiting its aggrieved members with the aim of reconciling them with the now factionalised party but they had yet to visit the former President.

Members of the Board of Trustees of the party visited former President Goodluck Jonathan in Abuja two days ago.

They had earlier visited the home of a former Minister of Finance, Adamu Ciroma.