Obasanjo is the most corrupt Nigerian leader ever – Ghali Na’aba 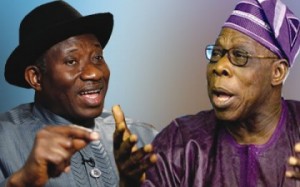 Former Speaker of the House Representatives, Ghali Umar Na’aba, has said that former President, Olusegun Obasanjo remains the most corrupt Nigerian leader.
He added that Obasanjo had no moral right to criticize anyone assumed to be corrupt.

“I don’t think there is anybody more corrupt in this country like the former President. As the Speaker, I took Obasanjo on several issues of expenditure offences which he committed and could not show remorse.

“So, I don’t think he has the integrity to call anybody in the NASS corrupt. This is the man who became President with nothing and today he is one of the richest Nigerians, let him explain to Nigerians how he acquired the money

”On his planned tenure elongation, I am aware that some ‎monies was given to the national assembly members both the House of Representatives and the Senate.

“It was alleged that the Senators got 50 million each while 40 million was given to the House of Representatives members, some collected and some did not collect. But I am aware that money was distributed by Obasanjo,” he stated.
On the alleged padding, Na’abba said he expected that for 16 years of return to democracy, Nigerians would have understood the responsibilities of the National Assembly.

“For some weeks now, there has been controversy over what is called padding. As far as I am concerned, the National Assembly has the responsibility to pass the budget, approve it and allow the executive arm to execute it.

“According to my understanding, where the issue being referred to as padding comes into play is a situation where some members go behind and add items of expenditure to what has already been agreed upon, for either stealing the funds or doing whatever they feel like doing with it.

“But, this stealing of fund cannot be possible without the active connivance with some members of the executive arm.

“So far, accusations are being traded amongst members of the House. No investigation has been conducted.

“On the call for the resignation of the Speaker, the question is, what has the Speaker done to warrant his resignation?‎” He queried.

On whether padding was an offence, he said, “It all depends from what angle you look at it, I just told you that the responsibi‎lity of appropriation belongs to the national assembly.

“If padding is seen as an offence, it is when some members of the National Assembly decide to add items of expenditure through the back door after the budget has been passed by both houses. It, therefore, behoves on Nigerians to decide who represents them in the national assembly”.