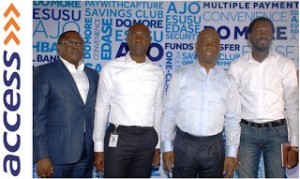 Leading Nigeria’s technology-driven financial institution, the Access Bank Plc, has made a debut of its PaywithCapture 5.0 with resolve to change the way of banking in the country, reports

Unveiling the PaywithCapture 5.0 in Lagos at Civic Centre, Victoria Island on Tuesday, the Group Managing Director, Access Bank Plc, Mr. Herbert Wigwe said the upgrade of the banking application, PaywithCapture to 5.0 became expedient due to the velocity of changes in technologies.

He also said that with Internet of Things (IoT), PaywithCapture will change the way banking activities are done in Nigeria for good, stressing that it answers tomorrow’s questions thereby creating an illimitable answers.

Wigwe revealed that initially, when PaywithCapture was launched it garnered some 1 million downloads within the first three months, and pointed out that the bank’s current mantra centres on three core areas namely security, privacy and data encryption.

Nowadays, he said, “Your phone is your power,” adding that the era of “I don’t have my purse or bag is over” just as he declared “With the PaywithCapture, the opportunity is illimitable.”

He also explained that the latest version, PayWithCapture 5.0 comes with additional features that enable customers to transfer funds from any bank account (one or more) to any bank account or phone number and email addresses.

“PayWithCapture 5.0 has also expanded to the web for users to experience the many benefits on larger screens,” he said, and also offers a ‘USSD’ (Unstructured Supplementary Service Data) on a Global System for Mobile (GSM) communication technology that is used to send text between mobile phone service.

He said that by dialling *901# allows users to carry out most of the listed functions without the need to access the internet.

The Access Bank boss said that PayWithCapture 5.0, users could still enjoy the success of QR code scanning for payments but with the added ability to make transfers to bank accounts, phone numbers and email addresses.

Users can also set up a savings club through PayWithCapture. Savings Clubs, commonly known as Ajo or Esusu enable them save jointly with friends towards a common goal as the funds can be pooled and rotated among all members of the group or pooled and given to one person.

Responding to questions by ITRealms, the Head, Digital Banking at Access Bank, Adeleke Adekoya explained that as a listening bank, they heard about the issues and complaints customers had on the old app, hence, with this new version, “we’ve tried to resolve them all.”

According to Adekoya, the latest version has extended beyond simply scanning QR-Codes to pay for transactions to allowing customers experience banking in a way that feels as personal as they want it to be.

Another key feature of the upgrade, he pointed out, is the introduction of the PayWithCapture Titanium Card.

“Simply request for the card on PayWithCapture, then transfer funds from payment methods linked to your account and you can use your PayWithCapture debit card anywhere around the world you see the MasterCard sign,” Adekoya said.