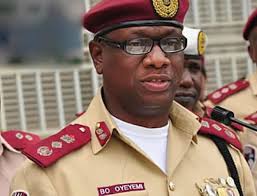 The Federal Road Safety Corps has revealed that the revamped Driving School Standardisation Programme website application has seen 170,505 applicants made, 82,086 graduated from the accredited driving schools, 1,103 driving schools applied for enlistment, 623 certified, while 480 not certified.
In a statement released by the Head of Media Relations and Strategy, Bisi Kazeem, the FRSC noted that the revamped Driving School Standardization Programme web application, which came into effect on February 1, 2016 allows all driving schools across the 36 states of the Federation, including the FCT, to enrol and update trainee records using their usernames and passwords.
According to Kazeem, the Corps Marshal, Boboye Oyeyemi, has promised that the Driving School Standardization Programme is different from what it was where series of problems that once beset it is not limited to lack of proper basic learner drivers training, incomplete mandatory training hours, Driving Schools as well as touts at various licensing centres issuing certificates to untrained drivers, absence of reliable database for all driving schools, lack of records of all drivers trained by driving schools and uniform driving programmes.
Other issues observed after full implementation of the revamp were driving schools enrolling more than what their facilities can take, multiple logins by driving schools who gave their passwords and usernames out, driving schools updating vehicles that are not branded for training, updating training records for trainees without practical training for 26 sessions before generating a driving school certificate with a unique code, which confirms its authenticity.
Against this backdrop, Oyeyemi noted that the actions the Corps took in revamping the DSSP to curb the antithetical trend included the modification of DSSP web application to allow single login; pegging the application to allow driving schools to train based on the facilities they have, that is  one vehicle, one instructor can train eight persons per day, two vehicles, two instructors to train 16 persons per day, in this order; and ensuring that trainings are not backdated.
FRSC driving school standardisation programme website application revamped for greater efficiency slideshow 2016-08-10
Younews Ng
Share