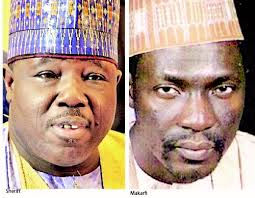 Six days to its National Convention in Port Harcourt, the Rivers State capital, all is still not well with the Peoples Democratic Party (PDP).

Sheriff also demanded that its venue be moved from Port Harcourt to Abuja on a yet to be agreed date.

He tabled his demands at a meeting with some members of the PDP Board of Trustees (BoT) Reconciliation Committee in Abuja on Tuesday night. The meeting ended in the wee hours of yesterday.

He also asked that the local government and ward congresses conducted by his group but cancelled by the Makarfi camp be upheld.

Leader of the reconciliation team Prof. Jerry Gana promised to take Sheriff’s message to the BoT in council.

The reconciliation team was raised by the BoT to prevail on Sheriff  to ensure that the party held the convention united.

At the meeting, Sheriff blamed the leaders and some members of the BoT for the “lingering crisis”.

According to him, the crisis would have been prevented if the BoT leadership and members had been alive to their responsibilities.

“Some of our leaders are party to our problem.‎ The moment we want to use one impunity  to address another, it will not work”.

He urged the reconciliation team to go back and address his demands and arrive at a lasting solution to the crisis.

Speaking with reporters, Gana said the committee had taken note of the problems within the party.

He said: “We are delighted that there is a clear resolution on the determination and the desire that the problems be resolved, unity be re -established and for PDP to move forward”.

The PDP, he said, would resolve the crisis and come out of it stronger, adding: ‎”Nigerians are waiting for PDP, they are missing PDP, they are crying and yearning for PDP because the 16 years of democracy cannot be wasted away”

Accusing the Sheriff group of maintaining a hardline position on the crisis, Makarfi, who spoke on Channels Television monitored in Lagos,  said his camp had sat with the other side 20 times without a headway. He said of the 15 suits pending in court, none was filed by his group. “We are defendants”, he said, adding that three of the four court rulings favoured the caretaker committee.

Makarfi said the appointment of Sheriff as acting PDP chairman was wrong, noting that Sheriff’s name was not among the five presented by the Northeast zone of the PDP to replace and complete the tenure of the former Chairman, Adamu Mu’azu, who resigned.

Some PDP governors, he said, inserted Sheriff’s name into the list. “When the list was presented to the expanded National Executive Committee (NEC) for consideration, many people walked out of the meeting in protest against the inclusion of Sheriff’s name”, he said.

After reconciliation, he said, it was agreed that Sheriff would serve for three months within which he would organise national convention where substantive party officers would be elected.

According to him, the agreement was breached as Sheriff started planning to succeed himself and plotting to emerge as the PDP presidential candidate in 2019. Sheriff, Makarfi claimed, promised three governors the running mate ticket. “This is what led us to where we are today”, he said.

On the legality of the national convention purportedly held on May 20, by his group in Port Harcourt, Makarfi explained that there was no court order stopping the convention, the court only restrained the party from conducting election for the office of the national chairman, national secretary and national auditor.

“The May 20 Convention sacked the Sheriff-led executive. The convention has power to set up any organ; that was how the caretaker committee came to be. It was monitored by the Independent National Electoral Commission (INEC). I have with me a copy of the INEC’s report which states that the May 20 convention did not contravene any court order”. On the planned August 17 convention, Makarfi said: “It will hold as scheduled; none of the 15 law suits has restrained us from holding the convention”.

Makarfi said PDP would come out of the crisis stronger, stating: “We have to find our feet as a major opposition party in the country. I am sure within two or three months, we will get over all these problems and PDP will become solid”.

On the zoning of the party’s offices, Makarfi said they were zoned between north and south.  “There can be micro-zoning within the two divides (i.e. north and south); that notwithstanding, every member has the right to seek election for any position zoned to the divide they belong”, he said.

he said. he said. After reconciliation Makarfi claimed Six days to its National Convention in Port Harcourt slideshow who resigned. Some PDP governors 2016-08-11
Younews Ng
Share

Tags he said. he said. After reconciliation Makarfi claimed Six days to its National Convention in Port Harcourt slideshow who resigned. Some PDP governors