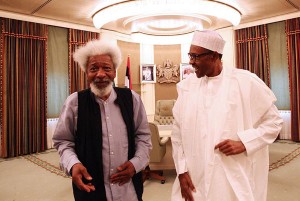 The meeting which lasted about an hour was held inside the President’s office at the Presidential Villa, Abuja.

The agenda of the meeting described as a private one was not made public and the Presidency did not issue any statement on it.

As he emerged from the President’s office after the meeting, the Nobel Laureate was visibly surprised to see State House correspondents who were already laying ambush for him in front of the Press Gallery.

“I didn’t come to see you people,” he said as he attempted to break through a barricade set up by the journalists.

When it became clear to him that the reporters would not relent, Soyinka said, “I came to discuss national and international matters, general matters, that’s all!”

When further probed about the details of the discussion, he said he would not divulge such.

Clearly not comfortable with press interview, Soyinka declared, “I will be holding a press conference in about a week. You can ask me any question then, but now, please I will just like to get away.”

With that the journalists made way for him to leave the premises.

Previous From OCT 1,You Must Get Speed Limiter For N36,000 -FRSC
Next 6 Days To Convention,PDP Crises Deepens,Sheriff\Makarfi Still At War